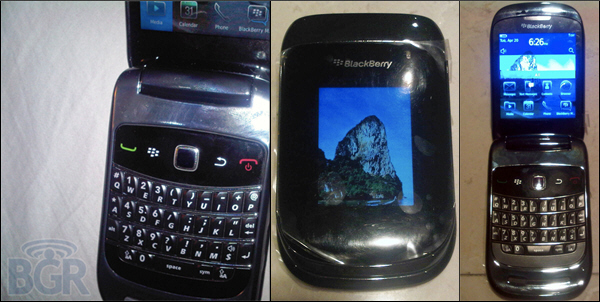 It's not often that we have news from US Cellular on back-to-back days, but this one we just couldn't pass up. In what appeared to just be a press release announcing some Android devices, a paragraph about the Bold 9650 release caught my eye.

The carrier will release the BlackBerry Bold in early August and later this year it will offer a BlackBerry flip smartphone with a full QWERTY keyboard. U.S. Cellular is also releasing new touch screen devices like the LG Banter Touch featuring a 3-inch touch display and side-sliding QWERTY keyboard.

If you check out the second part of the sentence, the reference to the "BlackBerry flip smartphone with a full QWERTY keyboard" can only be referring to our good friend the BlackBerry 9670 (unless there is yet another full-QWERTY flip in the works that we have yet to hear of). What does this mean? Well most likely that Verizon will land the little guy first and US Cellular will (as always) follow in their footsteps a few months behind. So if you do the math, the 9670 should be released somewhere in the next few months... hopefully sooner than later. Check out the full release below.

CHICAGO, June 24 /PRNewswire-FirstCall/ -- U.S. Cellular's customers have come to expect a reliable network, customer service and innovative programs like Overage Protection and Battery Swap, and now the wireless carrier is unveiling a wave of cutting-edge devices that will join its smartphone lineup this year.

U.S. Cellular is launching four phones in 2010 that run on the Android operating system, beginning with the release of the Samsung Acclaim on July 9 and the HTC Desire, with a vibrant 3.7-inch touch screen, 1 GHz Snapdragon processor, 5 megapixel camera and Wi-Fi, in early August. Another highly-anticipated Samsung device and an LG device with a large touch screen and slide-out, ergonomically-designed QWERTY keyboard, will be in stores in October.

"We're excited about everything these Android-powered devices will bring to our customers," said Edward Perez, vice president of marketing and sales operations for U.S. Cellular. "They give customers quick and easy access to thousands of applications, so each device can be completely unique and mirror their personal tastes and lifestyles. The phones will be a great complement to the popular BlackBerry® and Windows Mobile® devices that already anchor our smartphone line."

The Acclaim is exclusive to U.S. Cellular customers. It has a slide-out QWERTY keyboard with a 3.2-inch touch screen, 3 megapixel camera and Wi-Fi.

All of U.S. Cellular's phones running on Android give customers access to popular Google applications and will be pre-loaded with U.S. Cellular applications such as My Contacts Backup, City ID, Tone Room Deluxe and Your Navigator Deluxe. Customers can tap into the Android Market, a rapidly-growing catalog of more than 70,000 applications, most of which are free, to transform their phone into a lifestyle device.

The carrier will release the BlackBerry Bold in early August and later this year it will offer a BlackBerry flip smartphone with a full QWERTY keyboard. U.S. Cellular is also releasing new touch screen devices like the LG Banter Touch featuring a 3-inch touch display and side-sliding QWERTY keyboard.

Customers who use their phones primarily for talking and texting also have a few new options coming their way: a dark purple QWERTY Motorola device with a unique square shape and a side-sliding QWERTY device from Samsung with a 2 megapixel camera designed for quick and easy texting.

"We've always believed that our customers deserve a wide selection of phones that fit their individual needs," said Perez. "We hope our customers are as excited as we are about what we have coming up between now and the end of the year."