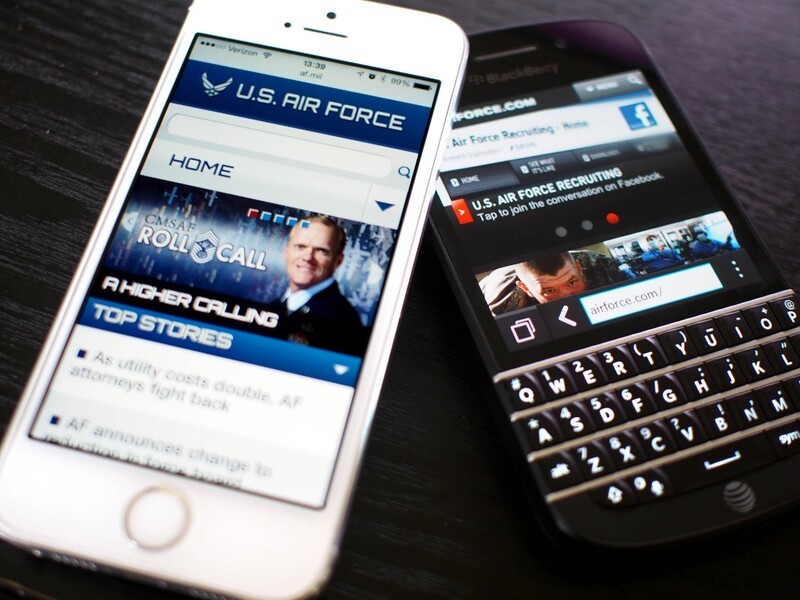 The United States Air Force is replacing 5000 legacy BlackBerry smartphones with Apple's iPhone, and eventually all of their BlackBerry users will have to make the changeover. The announcement, reported by Defense News, comes as the future of BlackBerry within the Department of Defense is debated, with the chips seeming to fall on the side of transitioning away from a network supporting a mish-mash of BlackBerry 6 and 7 devices to a mix of modern devices — though apparently without BlackBerry 10 in that mix. The situation has changed dramatically since this time last year, when the Department of Defense was adamant they weren't dropping BlackBerry.

Brigadier General Kevin Wooten, the communications director for Air Force Space Command (which manages the Air Force's IT infrastructure), said that "in order to keep costs down and save on network resources, BlackBerrys will be turned in and shut off once the user is transitioned to an iOS device." Additionally, anybody who hopes to activate a new BlackBerry on the Air Force network will require approval from the Air Force Space Command. The general that's attached to his BlackBerry is going to have to write an awfully compelling memo justifying why he should get a new one.

Both iOS and Samsung's Knox-enabled Android smartphones have been approved for use on Department of Defense networks, though the process of adding those new devices has been slow. Given the nature of government purchasing contracts, that's little surprise. BlackBerry 10 has also received DoD approval. Transitioning the tens of thousands of BlackBerry smartphones onto iOS and maybe Android will take time and money, the latter of which the US government has been more prudent about than in recent years.

But it seems that either way, BlackBerry hasn't presented a compelling case to the U.S.A.F. The Air Force has long led the advancement of technology in the Department of Defense (they are the ones with stealth planes and satellites, after all), so where the airmen go, so too will the Soldiers, Sailors, and Marines of the United States Armed Forces.