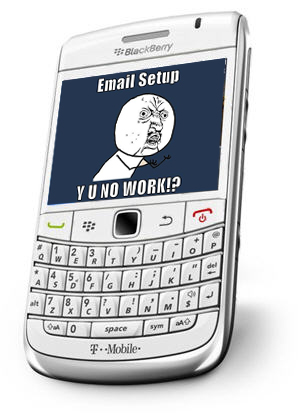 By now anyone who has tried to tweak any email settings from their device has no doubt had to update the Email Setup app OTA. The update changes up the UI a bit as well as streamlines things to make them easier to navigate, but along with the good come the bad. This past week I fired up my BlackBerry Torch to test some things out. As I went to change up my email address I was asked to update the app and so I did (mind you I was running a leaked OS - gasp!). After the update completed naturally I had to reboot the device. Upon doing so I watch the progress bar tick away until it was full. I forgot about it for a while, but then 30 minutes or so later checked again and sure enough it still hadn't started. I pulled the battery to give it another go with the same result. This time I let it sit and after about 40 minutes I got the dreaded app error (6 0 5 0 7 0 something) and had to reload the OS. This time I popped on an official carrier OS, went through the process and updated the Email Setup once again. My Torch started without a hitch and I was good to go.

Fast forward a few days. I had a friend struggling with a Curve 8330, so I offered to let her borrow my unused 9330 instead. Again, running a leaked OS, I was asked to update the Email Setup and again I had the same result - a bricked device. I reloaded an official OS, updated again and presto - up and running. So in my mind I believed it to be an issue with running a leaked OS and attempting the update, but others haven't had the same issue. So I'm curious to know just how many of you had problems with the Email Setup update and if so, how did you work around it? Drop a comment here and let us know or hit up the forums for more discussion.