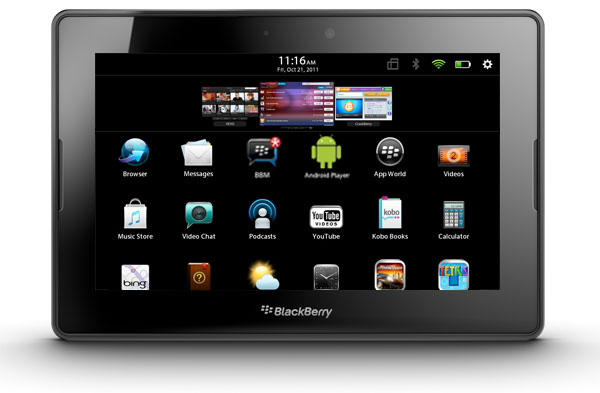 With all of the new BlackBerry Smartphone excitement this week (be sure to check out our reviews of the Bold 9900/9930 and Torch 9860/9850/9810), we forgot to note on the blogs the BlackBerry PlayBook's 120 day anniversary. Is it a milestone worthy of a joyous celebration? Not quite. Though the PlayBook is powerfully awesome and does have a ton of great things about it -- I spent an hour last night watching music videos on the new Vevo app -- we're still waiting for some MAJOR features to hit, like Native Email and the Android App Player. And while our BlackBerry PlayBook forums have been buzzing with users anxiously waiting for the next monthly-ish update in what we thought would be a "steady cadence" of updates, it's now looking like those shorter-term planned updates are on hold in favor of a much bigger PlayBook 2.0 re-launch.

With the development timeline of a lot of these separate PlayBook features lining up, it logically makes way more sense for RIM to put their time and energy into releasing one awesome update vs. a bunch of several smaller ones. At the same time, a BIG update will give all the tech reviewers and media outlets of the world a chance to take a second look at the PlayBook, which will hopefully result in much more positive reviews than the first batch and kickstart some new momentum on PlayBook sales. I know it sucks for us early adopters, but I get it.

So what are we looking at in the BlackBerry Tablet OS 2.0 re-launch? We've been hearing a bunch of things over the past few weeks from various sources on this one... Expect a native email client to be there, along with the Android App Player. We're thinking we'll get some news soon from RIM on the Android App Player front soon since they previously put out a statement that it would be available late this summer (I'll argue there's a difference between it being delayed and choosing to launch later). I'm **guessing** RIM will sort of keep their word here, but it's more likely it will be developers who soon get access so they can port and test their apps, while consumers will have to wait for the big update to be able to download and use them.

We're also expecting to see some UI changes with v2. We're hearing the current scrolling panels that are broken out in sections (All | Favorites | Media | Games | Bridge) will go away in favor of a more iOS-like panel, where users can create their own folders to group apps. Assuming that plays out, I think it's a smart move - especially if RIM wants the QNX SuperPhone OS to be a downsized/consistent version of the PlayBook's OS. It should be a great update, and I'll really be curious to see how some other things end up getting implemented.

We've heard previously that the native email client will be a standalone client and also that BBM will be tied to the PlayBook's PIN. So if you own a BlackBerry Smartphone and a BlackBerry PlayBook, you'll be juggling two contact lists vs. just one. Longer term it makes sense that users could have multiple BBM lists (multiple phones and tablets) tied back to the BlackBerry ID which controls all, but we're not sure that'll happen with this update. Remember, the QNX platform is still in its infancy, so RIM will be constantly working on it over the months and years ahead while at the same time making money from selling devices that run it. It's only going to evolve and get better as RIM gets all of their services working on it the way they want to. This is a massive technical transition for the company.

As for when this BIG update will happen, while I'd like to say soon I'm more so thinking the realistic goal at this point is BlackBerry DevCon (October 18th -20th). And it's RIM, who tends to be delayed. So if it the software isn't ready for consumer download by the event, I'd expect them to at least show it off there and hopefully we'll get it in the days and weeks that follow. But hey, my fingers are crossed and I'm hoping we get surprised and see it hit much sooner.

So there you have it PlayBook owners... an update rounding up what we've been hearing. I know a lot of you want these BIG updates NOW, as do I, but I personally think at this point a version 2 update makes way more sense than an incremental version 1 update. I'm sure we may see some maintenance releases, but the big excitement will come all at once. In the meantime, hopefully we'll see more great apps and games get announced like the Dead Space from EA. As always, keep it locked to CrackBerry and we'll do our best to keep you posted.