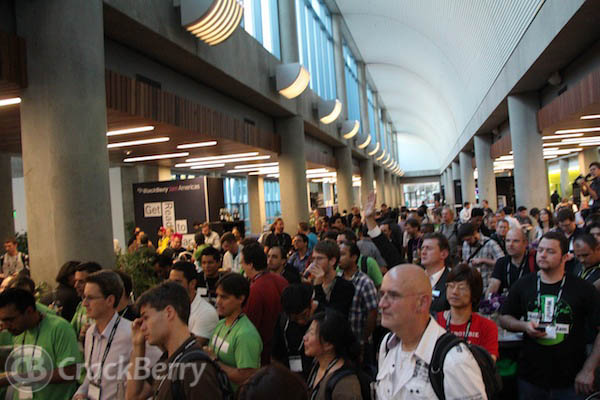 Things came to a close for me at BlackBerry Jam Americas a week ago today. We attended the BB Jam Tweetup, and In true CrackBerry fashion we were the first in and last out. As we walked out after the Tweetup was over, the crowd had already emptied out of the conference area and the security guards were starting their evening watch. The booths had all been closed down for the night and last of the food (and booze!) was being rolled away through the service doors. The show floor was nearly empty. The Porting Lounge -- which earlier had been overflowing with anxious developers looking to update their BlackBerry 10 Dev Alpha -- was now empty, waiting on one last day of hungry BlackBerry developers.

It's no secret that last year we were all a bit harsh on BlackBerry DevCon in San Francisco. It didn't "wow" us as much as we would have liked and we were just left feeling kind of "blah" after it was all over. I left San Francisco with no big emotions either way. Don't get me wrong -- I was still BlackBerry through and through -- I just didn't have that great feeling I like to have after an event.

Developer Neil Mispelaar was one who was left with the same feeling.

"While last years event was well organized and held in an excellent location, there was certainly an air of uncertainty or skepticism floating around. Heck, I remember Lazaridis opening the keynote with an apology for the three day service disruption ... In contrast, the energy level at this years Jam Americas was palpable. People were smiling ear to ear after the keynote and related demos. Alec Saunders should win an award for that video, as it really set the tone for the whole event: light hearted, yet serious, with a strong important message: the API's are ready and we love you."

This year, BlackBerry Jam Americas in San Jose pulled us to the opposite end, sending us home with the "let's rock and roll this" attitude that we wanted to have looking forward to BlackBerry 10. It wasn't the busiest conference I've been to, but it was most definitely the best vibed (yes, vibed) one thus far. Developers from all across the globe had come out to see what's in store for BlackBerry 10 and to learn just how easy it is to create apps for the BlackBerry platform.

Plenty of familiar faces were on scene to take in all the action. Jerome Carty of Kasai Labs, Marco van Hylckama Vlieg (who won a trip to last year's DevCon), Eric from Ebscer just to name a few. Quincy Carter, a CB winner this year, took in the conference for the first time and said "it was the best event I've been to in years. It was like a rock concert".

If you haven't been to a BlackBerry Conference before, it really is a sight. Unlike BlackBerry World, BlackBerry Jam is geared directly toward developers. The team at RIM really does love their devs and they certainly let it show right from the start.

Before the actual conference even kicked off, developers looking to get a head start attended the "Super Hackathon"where there were on lockdown in front of their computers to learn and code over the course of 10 hours. After many stretch breaks and countless can's of Red Bull, the apps were put in front of a panel (of which I had honor of being a part of) to see which would win top honors.

There was some great stuff cranked out in such a short time. From games to social apps, even I was amazed at how good they were. The overall winner was a sweet app called InstaRand - a "Chatroulette" style app where you send a random photo and receive one in return. All coded in under 10 hours. From there it was off to bed to try and get some sleep before things really go going.

On day one, RIM CEO Thorsten Heins took the stage to deliver the keynote. This is where things got off to a great start as we got to see some of the awesome features that are in store for BlackBerry 10. We got to see the BlackBerry 10 browser, the new BlackBerry App World, some sweet games and plenty on the applications, API's, SDK and much, much more.

From there, most developers got to download the Dev Alpha update that brought a slew of new features and the experience of the actual BB10 OS. The buzz kicked up a notch from here as developers all had what felt like a brand new device, and the media got to go hands-on with the Dev Alpha B to see what it was all about. This was the first time seeing BlackBerry 10 live in action for many people and it won them over instantly. Neil was one of the lucky developers to get a new Dev Alpha B.

"Having this device makes BB10 real. Its motivation to succeed like no other. Every time I see the device I can't help but think I should be writing code for it. Simulators don't do justice, the only way to develop is to have the device in hand."

For most, there were only good things to be said about BlackBerry 10. Marco put it simply as "The amazing user experience, the seamless multitasking and finally having capable hardware running a Blackberry OS." Independent developer Derek Konigsberg said what he likes about BlackBerry 10 is "finally having a real operating system on my BB phone, instead of a previous-generation embedded OS that's been pushed far beyond its design intentions."

I think for the developers that attended BlackBerry Jam, they came away with an even bigger passion for the platform. I don't even dive into coding and I walked away feeling so much BB10 goodness. The big hit is always the Jam Sessions and hands-on labs, and I think getting to play with Cascades was a big winner this time for attendees. I personally cannot wait to see just how much comes from the great BlackBerry developers. Already we've seen and heard some amazing app ideas and the BlackBerry 10 platform is just begging for more.

The Tweetup was my final hoorah at BlackBerry Jam this year. I had an early flight out on Thursday morning, so I made sure to get in some last minute intros and chats with the BlackBerry faithful. Just listening in on conversations or talking with developers made me feel so good about what we do. I love to be able to go to these events and just see the life that the community has. It's often hard to see the reach of things from inside my office in New Jersey, but when we actually get to go out and see in person just how passionate everyone is, it really makes me feel awesome. Now more than ever I really cannot wait for the mobile computing platform that is BlackBerry 10 and just where things will go down the road.