We have known for some time that a few Police departments in Canada already use the BlackBerry PlayBook, and if my memory serves me correctly I think that the PlayBook Cruiser even turned up at Kevin's house one day to show off its super powers! The software onboard the BlackBerry PlayBook designed for the police is developed by Mobile Innovations who we have also featured a several times recently.

Rather excitingly for me I had a meeting this week with my new friend Bruce Murchie who works for Xenium Solutions in the UK who has an ongoing relationship with Mobile Innovations. As the BlackBerry solution has been so successful in Canada it is now time to start working on the UK Police Forces and to see if they are interested in utilizing the PlayBook as an in-car option. And the good news is that many are.

Sussex Police have committed to a trial and if successful they will install the PlayBook into about 400 of their vehicles. Clearly this is great news for RIM but it is also a massive cost saving exercise for the police who are having their budgets cut on a yearly basis. So for example - a standard Police response car may well have some kind of screen and computer installed into it and I am told that the cost of the equipment may be as much as £4000. As we are all aware the BlackBerry PlayBook is as cheap as chips these days and even with the dock and additional hardware required to make best use of the tablet the cost will be a fraction off the £4000. 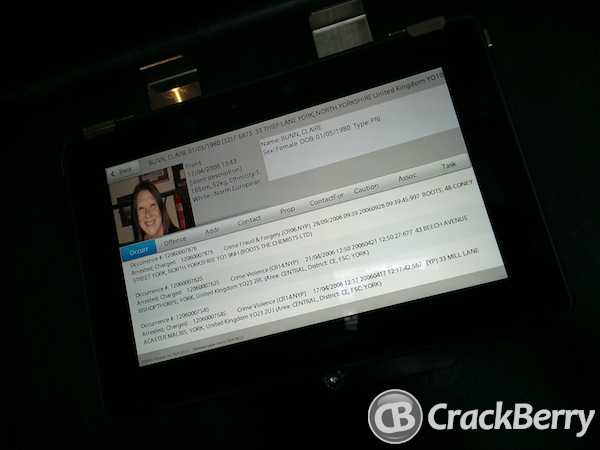 The PlayBooks that will be used by the UK Police will be the WiFi versions however each officer will also be issued with a BlackBerry smartphone to allow him to bridge with the tablet. As well as being a money saving solution there are a whole host of other advantages to the Police using the PlayBook. With the new style dock that Mobile Innovations have created the Police Officer can take the PlayBook with him wherever he/she goes, therefore having the benefit of not only accessing the specific police applications but also being able to take photos, record HD video etc.

Along with the PlayBook there will be a variety of other hardware installed into the police car - including a printer, a scanner for use with driving licences, NFC connectivity, GPS, the BlackBerry Mini Keyboard and quite impressively - a webcam which can be used for an array of tasks including streaming live video back to the police control room.

Bruce tells me that three of our Police Forces in Wales are also very interested in the PlayBook solution and are currently waiting for a final report from Sussex Police at the end of this month before making a decision. As well as BlackBerry 10 on the horizon it looks like things may well be picking up for the PlayBook too. That makes me a 'happy James'.