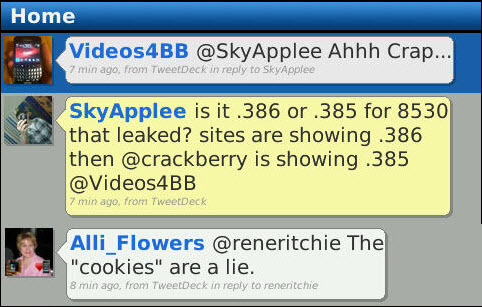 Some of you may have caught wind of the fact the developer build of ÜberTwitter was leaked yesterday. Sometimes when leaks happen developers take their offerings and head underground so to speak and leaks never happen again, SkyFire is a good example of that. Other times, developers see it as a chance to actually grab new users and reach a broader audience. Such is the case with ÜberTwitter. ÜberTwitter has actually put their leaked version out there for everyone now. @Codewarden has outlined as to why the release has been made available and what to expect from the next version of ÜberTwitter.

We have been working very hard to provide you with a 'knock-out' release for Beta-6. Unfortunately, the first pre-release of this version was shared widely beyond our group of testers, and to compound this, they didn't properly post the correct BlackBerry OS builds. We recognize that many of our users unfortunately downloaded this version, most with the wrong OS build. In order to rectify this problem, we are putting the first pre-release out there for anyone that wants to download it and give it a try. We have builds for 4.5, 4.6, 4.7, and 5.0. Please understand that this is not a finished product, the UI, colors, and some inner workings are not complete, but do work. The final release is still a few weeks away, but I hope that you agree that it will be well worth the wait!