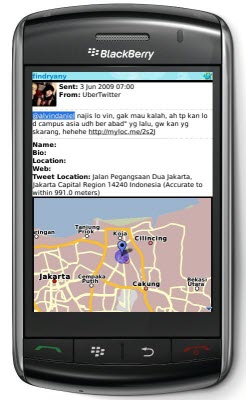 The good folks over at ÜberTwitter have been hard at work on their latest version of their Twitter client. This time around the list of bug fixes is again huge as they are listening to the users. However, this time around ÜberTwitter may be bring with it some unwelcomed changes.

First, the what some may consider bad news. ÜberTwitter will now be coming in two different flavours, a paid version and an ad supported version. The ad supported version will randomly insert advertisements into your timelines where as the paid version when finalized will have this absent. Now the good news... ÜberTwitter will be integrating BlackBerry Maps for the "Tweet My Location" function so now rather then opening up a url, users who have BlackBerry Maps installed will see your location on that.

So what do you all think? Tweet Genius was the first Twitter application to come to market as a paid one. Having used ÜberTwitter for so long now with no ads would you still use it if that ads are there? Or would you pay for the premium version to have them gone? Or would you just simply move to a different Twitter client where all was still free and none of that was a worry? Let us know in the comments.