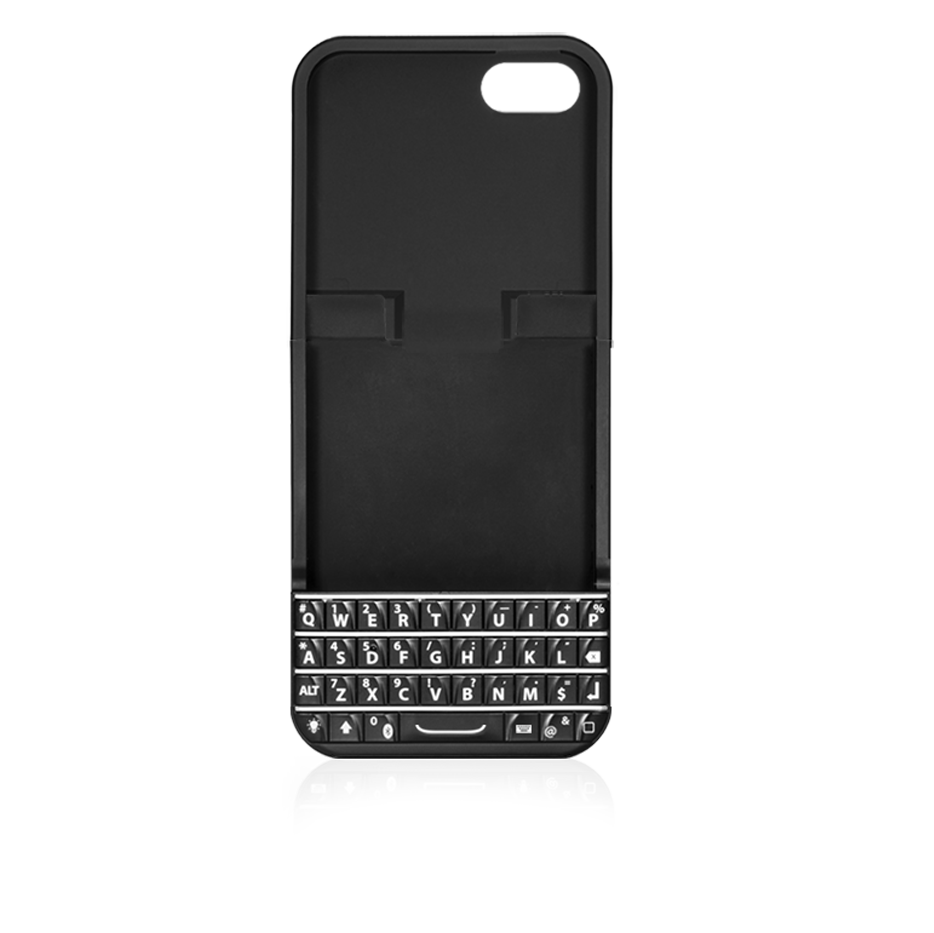 The Typo keyboard is an accessory that adds a full physical keyboard to the iPhone 5 & 5s. The Typo was founded in part by celebrity, Ryan Seacrest, who stated how much he loved and missed his BlackBerry keyboard when using an iPhone. The Typo keyboard features a two=piece design that slides over the iPhone and provides users will a full QWERTY keyboard below the device. Access to the Home button is available via a key on the Typo. The Typo connects via Bluetooth and is powered but its own battery and charged over a microUSB connection.

BlackBerry has also filed a lawsuit against Typo, trying to halt sales of the device and claiming that the accessory infringes on at least three of their patents. They state that the Typo resembles that of the BlackBerry Q10 and has many design elements an characteristics of BlackBerry keyboards.

The Typo is currently available for pre-order via the company's site for $99.

BlackBerry and Typo have reached a settlement

BlackBerry and Typo have reached a settlement in the case against Typo for the blatant attempts at copying BlackBerry's iconic keyboard design. The two companies have seen each other in court before, but this settlement could mark the end of that. Some of the terms of the agreement include: As part of the settlement, Typo Products LLC, Typo Innovations LLC, Show Media LLC, Hallier...

BlackBerry's going back to court over Typo2

Not content with legally prevailing over Typo on multiple occasions, BlackBerry is dragging Typo back into court of the iPhone case maker's second iteration of their Typo keyboard. The first edition was barred from sales for copying the Q10 keyboard design, which Typo ignored, which ended with them being hit with an $860,000 fine. Now the Typo2, which looks less like a BlackBerry...

While BlackBerry has been busy winning some longstanding legal issues, they've also been taking care of some more recent ones with pretty good results as well. As noted previously, BlackBerry recently went back to the judge in the BlackBerry Limited vs. Typo Products LLC case to ask judge William Orrick to uphold a preliminary injunction preventing Typo from selling its iPhone keyboard...

The Bluetooth-enabled keyboard case for iPhone back by Ryan Seacrest, Typo, continues to earn the legal ire of BlackBerry as they're still on sale. Apparently 11,000 Typos have been sold at $100 a pop, causing BlackBerry to issue another request for a sales injunction from California federal judge William Orrick. The sale of Typo keyboards violates an earlier court order barring their...

As if the original Typo keyboard wasn't enough, a new version of everyone's favorite iPhone accessory is now available for pre-order. The $99 Typo 2 — while very similar to it's older brother — has been remastered and redesigned with some new features, hoping to steer clear of any lawsuits this time around. The Typo 2 features Typo smart typing (auto capitalization and the like), a...

BlackBerry is pushing to immediately halt sales of the Typo keyboard case for iPhone. While Typo insists that they are a small company that lacks the capability to produce a large quantity of keyboards, BlackBerry alleges that Typo has contradicted these statements, flooding the market with keyboards before an injunction could be imposed. Typo previously stated that it had written and...

It's a bitter setback for Typo and a victory for BlackBerry, but it's not all that surprising that BlackBerry was able to win an injunction on sales of the Typo keyboard for iPhone. Considering how much Typo looks like a BlackBerry keyboard and how much BlackBerry has vowed to fight back against their perceived infringement, a sales ban was all but a foregone conclusion at this point....

BlackBerry moves one step closer to shutting down Typo

The battle between BlackBerry and the look alike iPhone accessory, Typo , has been going on for a few weeks now. BlackBerry is suing Typo and claims that their iPhone keyboard accessory infringes on multiple BlackBerry patents — and also looks a lot like the BlackBerry Q10 keyboard. Things in the case have been a bit back and forth with nothing showing a clear winner on either end....

The BlackBerry vs. Typo Products saga is far from over but it's certainly moving now. Recent events placed Typo Products in front of the Federal Court to speak to the Judge presiding over the case to rule that the patents have not been infringed and to make some of the claims invalid effectively dismissing every claim in BlackBerry's complaint with prejudice and protect them further...

Round Two: Typo fights back against BlackBerry

The BlackBerry / Typo saga continues. Recently BlackBerry sought an injunction against Typo and their iPhone keyboard accessory, claiming that the Typo infringes on one or more of BlackBerry's patents. BlackBerry aimed to block sales of the device in the US for the time being. Typo isn't going down without a fight however. In order for BlackBerry to win out, they'll need to convince...

BlackBerry looks to block U.S. sales of the Typo keyboard

Things are starting to heat up now. As the Typo keyboard takes the iPhone world by storm, BlackBerry has now asked a California court to block sales of the device in the U.S. BlackBerry has accused the Seacrest-backed accessory of patent infringement (with good reason) even though some of the design elements differ slightly than those on the physical keyboard of the BlackBerry Q10....

Should BlackBerry make its own detachable keyboard for iPhone?

It's not secret that Kevin fell in love with his Typo keyboard during CES last week — that is until he wore it out. Being a long-time BlackBerry user it's only natural that he'd be awesome at typing a pseudo-BlackBerry keyboard, no matter what device. I played with the Typo a bit myself and while it's not ideal, it certainly makes for a great solution for keyboard lovers. A thread has...

If you follow me on Instagram or Twitter, you've been seeing some of my updates as I put the BlackBerry-esque Typo keyboard for the iPhone to the test. Now it's time for a bigger update to the in-depth Typo review I posted previously. In that review I noted that the build quality felt a little on the cheap side and that durability was something I had concerns about. It didn't take long...