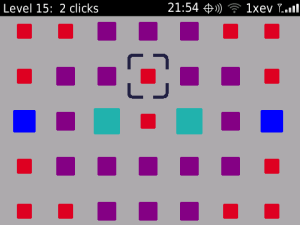 In the past, we've shown you a couple of great games from the team over at Ebscer here on the blogs. A little while ago we found out that two of Ebscer's highly popular games, Xploding Boxes & 10,000 Farkle have been updated with new levels and a few other great new features. If you haven't seen them before, both are challenging time-killers (that are super fun) that you can pick up and play anywhere. Keep reading to find out what's new!

The concept of this game is simple enough: start a chain reaction that will explode all of the boxes on the screen. Each level gives you a set number of clicks in order to advance. With the new 3.0 update, the paid version (in-app purchase of $2.99) of the game will have a grand total of 260 levels while the free version only gives you 25. Xploding Boxes is available for most BlackBerry devices running OS 5.0 or higher including the BlackBerry PlayBook (running OS 1.0.6)! To gain access to all 260 levels via the in-app purchase requires version 2.1 of Blackberry AppWorld installed.

I tested Xploding Boxes on my 9670, 9930 & PlayBook and all three had smooth transitions and I noticed faster loading times on the PlayBook. You can even find some helpful videos on YouTube if you get stuck on a level or two.

The basis of the game is knowing how far to push your luck,which scoring combinations to keep and which to re-roll. Farkle gives you six dice to roll and awards points for certain combinations. Fewer points are also awarded for each individual 1 and 5. 10,000 Farkle has 4 game play modes: 10 turns, 10,000 points, vs friend & vs computer. Both the "vs" modes use the traditional race to 10,000 points. The default game mode gives you 10 turns to score as many points as you can. The 10,000 point mode is the traditional way to play where the goal is to reach 10,000 points in as few turns as possible. This app is available for most BlackBerry devices running OS 4.6 or higher via Blackberry AppWorld for $3.99.

Farkle has always been one of my favorite games so I was really happy to find out it was available for my BlackBerry devices. The latest update allows the player to exit the app in the middle of a game and then resume play once it's reopened. There were a couple of visual updates made as well as some game play improvements which only made a great app even better.