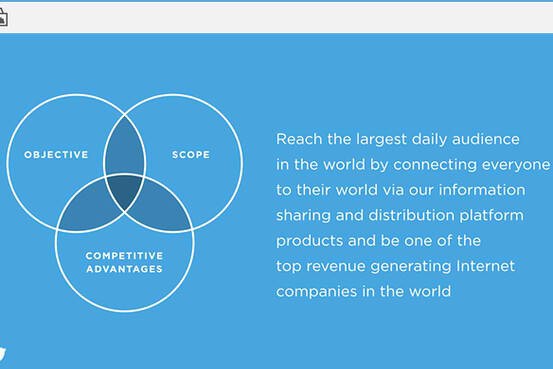 No longer the fun-loving "Toys 'R' Us" kid, Twitter is all grown up now and it wants to make money. The social network released a statement on Wednesday outlining its strategy on the Internet, stating that it wants to bring in revenue, and lots of it, though it did not give any specifics on that plan. The confusing statement was met with some mockery on the social network itself.

Reach the largest daily audience in the world by connecting everyone to their world via our information sharing and distribution platform products and be one of the top revenue generating Internet companies in the world.

One response to the statement on Twitter from user @dkberman calls out the strategy as wordy:

For its part, Twitter is saying that this is its strategy and not its mission. Twitter's mission is:

To give everyone the power to create and share ideas and information instantly, without barriers.

As part of its plan to improve, Twitter will bring more functionality to private messaging, release more standalone apps like Vine, and introduce Instant Timeline that will make it easy for new users to get updates without having to first follow other users.