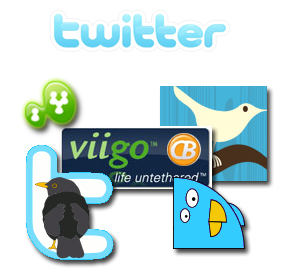 * Update: More clients have been busting onto the BlackBerry scene as of late including RIMs official Twitter for BlackBerry, so for more Twitter goodness, check out our updated Ultimate Twitter Client Roundup.

It seems that Twitter has made a surge as of late - especially with BlackBerry users.  Twitter services have always been available in the form of IM, SMS and WAP - but as every demanding BlackBerry user knows, a powerful easy to use app is the way to go for any mobile service. Until recently, we were stuck with only a few Twitter applications for Blackberry devices such as TwitterBerry and BlackBird.  Later down the road TinyTwitter came along, and then there was Twibble which was ported over from the N95. A few weeks ago we got word of SocialScope which shows amazing promise in its early alpha stages, and yesterday our friends at BerryReview let us know about BBTweet. There is also Twitter functionality being worked into a new version of Viigo which we learned about at CES. So if you aren't a Twitter user or just haven't started tweeting from your BlackBerry, here is a quick roundup of the pros and cons to these applications. The best part by far is that they are all free. The tough part is deciding which one is right for you!! Read on for more BlackBerry Twitter client info and let the decision making begin.

This is probaby the most well known Twitter application for Blackberry. Its ease of use and clean menu makes it simple for the average user. You can view your friends timeline, public timeline, direct messages and replies. You can also tweak the poll time (how of often the app checks for updates. TwitterBerry has options for alerts which are kind of shaky at the moment. Some users have issues with not being able to turn off the LED without a reboot. Twitpics through TwitterBerry seems to have issues on and off as well. I'm sure updates and fixes are in store for the next release. Check out Ryan's review of Twitterberry 0.8 here. You can download TwitterBerry free from your device browser at http://www.orangatame.com

Probably the simplest Twitter application, Blackbird is a text only client that is really an unknown. Overshadowed by the bigger apps, Blackbird hasn't seen an update since mid 2008. It's text-only interface makes it easy to use however it also lacks features.  I used BlackBird at CES as a secondary client and it did get the job done. If you aren't much for fancy looks, seeing your friends avatars and just want the basics, maybe give BlackBird a shot. You can learn more about BlackBird at http://dossy.org/twitter/blackbird/ or visit http://dossy.org/twitter/blackbird/0.4/Blackbird.jad from your mobile browser to download to your device.

An import from the Nokie N95, Twibble is geared more towards the Twitter power user.  It boasts many options like auto-refresh, keyboard shortcuts, themes and GPS for tweets. Being a ported application, some of the UI layout and menus seem tough to navigate and "busy" in parts, but overall if have the desire for a more powerful application, Twibble may be the way to go. Check out more on Twibble here. To download visit http://m.twibble.de from your device browser.

Only a few weeks into the game, SocialScope has become a hit with the CrackBerry Community. At first it was tough to snag a copy of their alpha, but things seems to have calmed down a bit now and most users have grabbed a copy. SocialScope has the cleanest layout of the Twitter applications, and it also adds in Facebook updates (you can view your friends status updates and update your own). They have a very responsive dev team that takes user feedback well and cranks out quick updates.  The UI is easy to navigate and allows options for update interval, retweet, notifications and more.  Another cool option is that you can tab users in addition to timelines, replies and direct messages which makes navigation a breeze.  Read more on SocialScope here. To get a copy of SocialScope, head over to http://socialscope.net/ and request an invite.

One of my favorite Blackberry applications, Viigo announced shortly before CES that it would be integrating Twitter into its long list of features. I had a chance to play around with it a bit and I love where it's at. Being able to cut down on my installed applications and having Twitter functionality in an application I use everyday is a great thing. The interface is easy to use, and Viigo splits up timelines, replies and messages into separate feeds. Viigo will also let you send articles to Twitter in the same way you can email them to friends with only one click. The page then gets formatted to a Viigo URL and when users jump through the link, it shows the posted page with a "Viigo bar" on the top - very cool. It's off to a great start, but still needs a little fixing as far as update interval and having more options. Check out Kevin's look at Viigo with Twitter here. Unfortunately, the new Viigo isn't yet available, but will hopefully be churned out in the next few weeks.

We got word of this one yesterday from our friends at BerryReview. BBTweet is a really cool app (I've only been playing with it for a few hours) that allows you to essentially integrate Twitter with your message inbox. It uses data so it won't eat up your messaging plan, and it makes it easy for casual users to read and reply to Twitter messages without having to learn a new application. It is a really cool application that has many new features in store for future versions. Check it out at https://code.google.com/archive/p/bbtweet or download OTA from this link.

Ultimately it's "to each his own" when it comes to Twitter apps on your device.  Since they are all free, give them a shot and see what works for you. There are pros and cons to each, but after a little playing around you'll be able to decide which one suits your needs best. I can't help but wonder if one day we'll see RIM partner up with Twitter directly to produce a BlackBerry client - seeing as they have already done so with Facebook and MySpace and Flickr. RIM is big on social networking these days, and Twitter is proving to be HUGE.