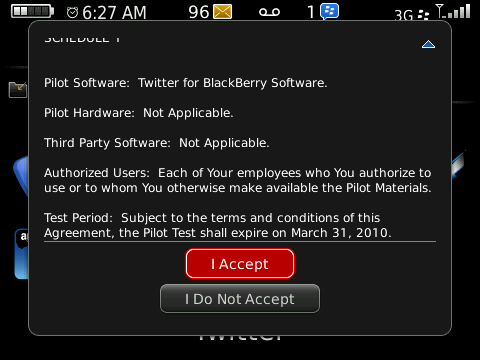 The long awaited, oft rumored Twitter for BlackBerry app has been released in beta form for a while now. Granted, not everyone was able to get their hands on a copy due to the invitation only nature in which the app was released. But that also hasn't stopped others from taking their own avenues in getting the same version released to those with invite codes. In fact, it's been in enough hands now to have generated quite the amount of feedback I assume considering RIM has placed the feedback URL right within the application itself.

So with that said, how come there have not been any updates released so far? Surely Research In Motion is working on the "beta" app. And if so, wouldn't they want the latest bug fixes and implementations tested? Many of you may not have noticed when installing Twitter for BlackBerry but the EULA (End User License Agreement) clearly stated the terms and conditions of the Pilot program end on March 31st, 2010 (shown above). So it should be fairly safe to assume we'll see a full on roll out shortly before or shortly after that and let’s hope by then they'll have pushed out some updates to the already existing users to check out and test.

I mention this because as cool as the application is and as much potential I see in it being a "super app" it's just simply not there yet, from my experience. It's slow, laggy at times and often interferes with other functions of the BlackBerry experience with its device lock ups and stalling. It's not so much that it's unbearable to use but it does happen at times. As I'm sure I mentioned before, possibly on the CrackBerry podcast, it's nice to see Research  In Motion including folks in betas but it's the results of that inclusion that actually counts to the end users. I don't want to have to feel like I have been Googled in the fact everything is stuck in perpetual beta. Drop some comments folks if you feel the same way here, I need to know I'm not alone in my logic.