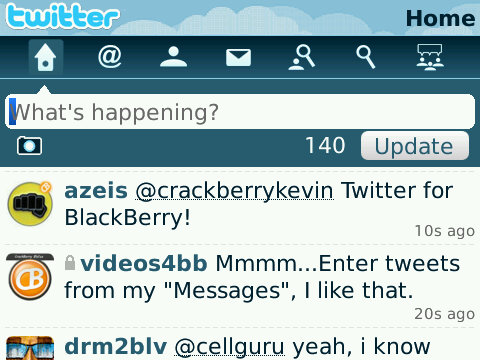 CTIA 2010 is now over and I caught the red eye home this morning from Las Vegas. It's a painful Monday - I'm taking the day to catch up on emails and recover from a weekend of debauchery. And unfortunately, my first post of the week on the blogs here may prove a little painful for all the Twitter lovers out there as well...

Last week we brought word straight from RIM's Twitter for BlackBerry booth at CTIA that March 31st would ring in public availability of the app. However, today I received the following update from RIM:

The March 31st launch date for the public beta of Twitter was prematurely shared at CTIA. The application will not leave its current limited beta in March. As of right now, the launch date hasn't been decided and the team is working to make sure the next release is feature-rich and has a great user experience before opening the app to everyone.

So there you have it. Public availability will not be coming this week as we were initially told. I know that kind of sucks, but at the same time it's not a bad thing if the extra time is going to mean more features and an overall improved user experience. And of course there are lots of great twitter apps out there already (see our Ultimate BlackBerry Twitter Client Roundup) to make the wait easier. We'll let you know when we have more news on this one.