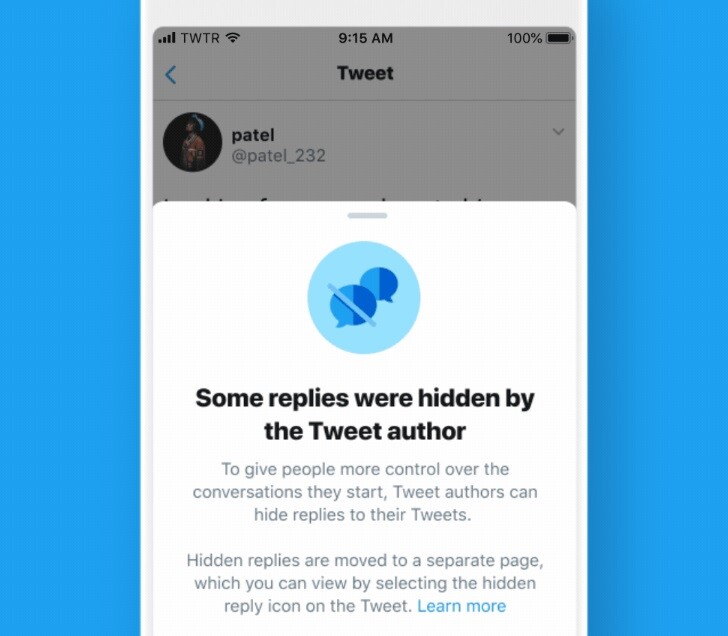 What you need to know

Twitter has announced that it is changing the way conversations work on Twitter, bringing more control to users so as to make Twitter safer and more comfortable.

According to a press release:

Everyone should feel safe and comfortable while talking on Twitter. To make this happen, we need to change how conversations work on our service. Currently, repliers can shift the topic or tone of a discussion and derail what you and your audience want to talk about. To give you more control over the conversations you start, we tested the option for you to hide replies to your Tweets. We learned that the feature is a useful new way to manage your conversations. Today, we're making this available to everyone globally.

Everyone will still be able to see replies to your Tweets but to make them visible and engage with them, you'll have to tap/click a grey icon, Twitter says this will give users more control over the conversations you start and the direction of the conversation.

Starting today, you can now hide replies to your Tweets. Out of sight, out of mind. pic.twitter.com/0Cfe4NMVPj

Twitter notes that during testing people mostly hid replies they thought were irrelevant, off-topic or annoying and says it's a new way to shut out noise. During testing, 85% of people who hid replies were not using the block or mute features. Apparently, public figures in politics and journalism haven't been hiding replies very often, which may prove surprising to some.

In Canada, 27% of people who had their Tweets hidden said they would reconsider how they interact with others in the future. Also, they thought it was a helpful way to manage what they saw, similar to muted keywords.

We learned that you may want to take further action after you hide a reply, so now we'll check to see if you want to also block the replier.

Addressing concerns over retaliation against people who hide replies because of the visible icon, Twitter said it was continuing to get feedback on this. It also said that these were early findings and that it would continue to learn as more people use the feature.

Twitter is also planning to launch a new hide replies endpoint, so developers can build additional conversation management tools. It also says it is exploring more options around "who can reply to or see specific conversations" - Twitter says it is testing engagement to see if this can lead to healthier discussions.

The new feature is now available globally on Twitter, do you think it's a good idea? Let us know!