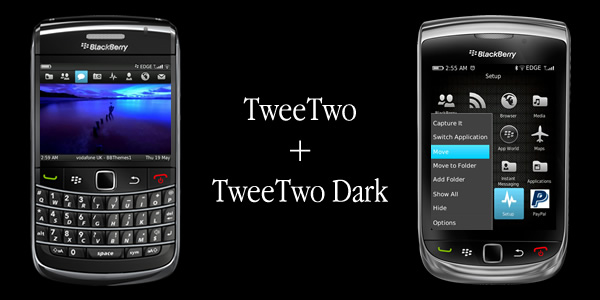 Twitter 2.0 was released for BlackBerry by RIM today, and with it came a great new UI, among other things. BBThemes has been hard at work since the Twitter update hit the beta zone and they have designed a sexy new theme to reflect the look of the Twitter app. Dubbed TweeTwo, it comes with sharp gray and white icons with blue highlights on dark backgrounds. The home screen features minimal banners and a hidden dock of 6-8 icons (depending on device) and hotspots and shortcuts throughout. You can choose between 2 versions, TweeTwo and TweeTwo Dark, which has darker backgrounds in the messages applications. It's a beautiful and well crafted theme you will be proud to use whether you are a Twitter user or not.

TweeTwo was created using the newly released Theme Builder Gold, and currently supports BlackBerry 9650, 97xx, and 9800 with more devices being released in the next few days. You can pick up TweeTwo or TweeTwo Dark on sale for $1.99 (will be $2.99 regularly).