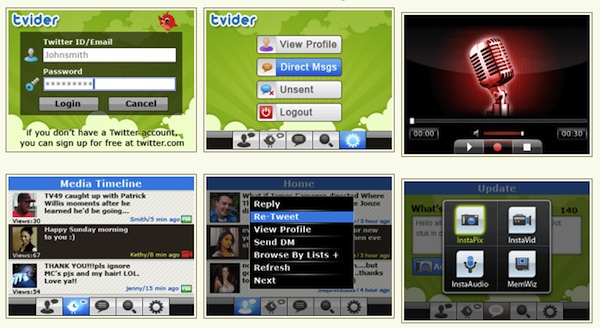 As far as Twitter apps go, Tvider was the last one I though would actually turn into a full featured client. I always saw it as more of an add on to twitter much like how TwitVid just serves the purpose of uploading videos. Yet, with the release of 2.1 Tvider has gone all the way. Sadly, with that change they have also made it a paid app that is only available via BlackBerry App World for $2.99. Not so sure the changes are enough to make you want to pay the price for a Twitter client when so many others are available at no cost.

Just in case that new list of features isn't enough to make you want to pay the $2.99, the old version of Tvider which is version 1.2 is still available for free. I can't see myself paying for Tvider considering the other options but I certainly will continue to use the old version for media uploads. Hopefully that version will remain free.