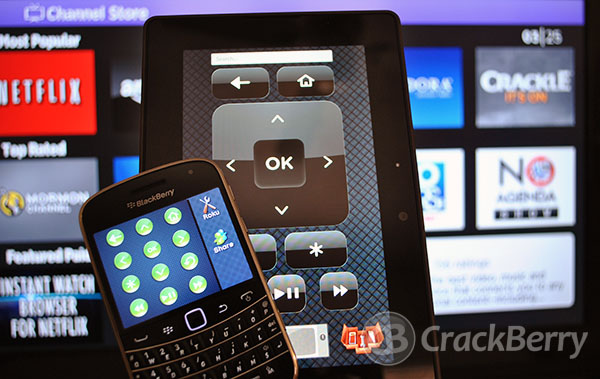 As we acquire gadgets and devices in our lives, we seem to end up with a ton of remote controls. TVs, DVD players, stereos… everything has one, and if you're like me you can probably never find the right one when you need it. I was super excited when I found out that I can now eliminate the search for at least one remote, the one that goes to my Roku player. Five Seasons Computer has developed apps for both BlackBerry 7 smartphones and the BlackBerry PlayBook which allow you to control your Roku player over wifi! Every feature you can access from the remote, you can now access on your BlackBerry device using Remoku. Not only can you do basic things like change the channel, you can also enable the developer screen, reboot your Roku, and more!

Features:
At this time, Remoku is available for BlackBerry 7 devices and the PlayBook, and either version can be purchased from BlackBerry App World for $2.99 at the links below. I have both versions, and I have to say that since installing them I've found myself using my Roku more often, maybe just because it's more fun to use my BlackBerry to control it!