When it comes to speed testing applications we're not spoilt for choice on BlackBerry 10. The most popular one worldwide is an Android app and that can be loaded onto your BlackBerry 10 device if you so wish.

However, I recently discovered Traffic Monitor with Speed Test arrive in BlackBerry World and after giving it a test run it's now my speed testing app of choice.

The app is free to download, which is always a bonus, but the reason I like this one so much is it's simplicity. As you'll see from the above video, once the app is open it's just a case of tapping the display to start the test. Once complete the results are displayed under the speed dial, but there are also three tabs at the base of the screen.

The first is where you perform the test itself, but jump into the middle one and all your previous results are displayed - handy for comparing locations. The third and final tab gives you some network information along with some about your battery as you can see below: 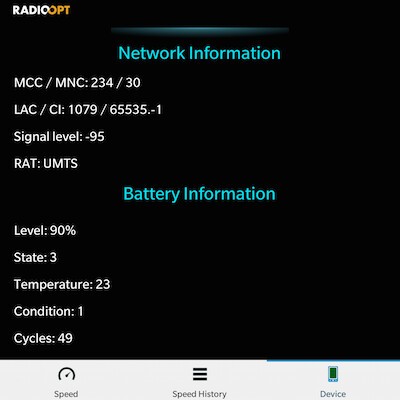 I suppose that the name of the app could be better as it isn't really doing much traffic monitoring, apart from showing your signal strength, but it sure is great at speed testing. With a nice blue on black user interface and no adverts you can't really go wrong with this one.

Give it a go and let us know what you think?