We announced recently that Disney had released Toy Story: Smash It! for BlackBerry 10 and as it looked such a beauty, I thought it was well worthy of taking a quick look at it on video for those of you that were wondering whether to part with a dollar for the game.

You certainly don't need to be a Toy Story fan to enjoy this one and it isn't just for kids. I myself became quite obsessed with the game once I started playing it. In comparing it's likability I suppose I would have to place Toy Story: Smash it! in the same ball park as Angry Birds. They are kind of similar, but in a different way if you know what I mean.

The concept with this one is fairly straight forward. You control Buzz Lightyear and your mission is to throw items at the blocks on-screen to knock the aliens off. To start with the game is nice and easy but as you progress there are some nice variations introduced to make things a little more challenging. 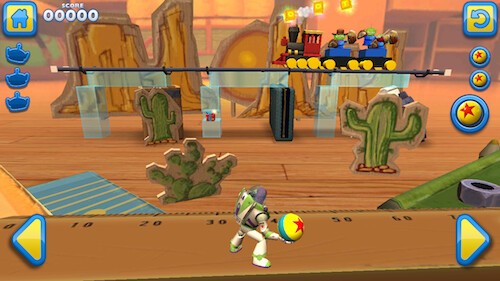 Taking a look at the controls, you'll see that you have directional arrows on the left and right of the display. This is just for moving Buzz so he can get the shot he needs. To throw an item you just touch Buzz and you'll get a target appear which you can drag around the screen. You'll want to aim for the blocks and not the aliens as hitting them won't do the job.

As you get further into the game you'll come up against different material blocks. Some will be wooden, some glass and some metal which take more than a normal ball to destroy. Luckily, you also get an variety of items to throw. You start with balls, but you'll move onto missiles and also balloons - each behave differently, but you'll be given instructions when a new one is available.

In terms of what else you have on-screen - over on the left you have the home button if you need to jump back into the menu. Below that you'll be shown how many aliens you have remaining to knock off and as you do so their faces will appear in the blue shapes. Your score and high score are also at the top left. Over on the right is where you will see your weapons. You only get so many shots per round so and the less hits it takes to get all the aliens - the more points you'll get.

At the end of each level you'll be awarded with a maximum of three stars. Getting the best score possible is achieved with a combination of not only knocking down the aliens with the least shots as possible, but also by getting as many points as you can. On each level there will be some yellow boxes around aliens. Hitting these will gain you some points and they also sometimes act as a good indication of where to aim.

There's six different episodes in the game - each containing 45 levels, so you won't complete this one too soon. What you will discover though is that in order to unlock more episodes you need to have collected a certain number of stars. There is a way around this in the form of in-app purchases if you are inpatient, but practice makes perfect. As you can see from the image above, you can unlock the full series in one hit if you like.

In terms of value for money I'd have to say that Toy Story: Smash It! is pretty well priced. For your buck you get hours of fun and I can say that from experience. As you would expect with a game from Disney, it has wonderful graphics and is accompanied by a sweet sound track - one of those ones that remains in your head even after you've stopped playing.

There really isn't much to dislike with this one. Plus it's also the style of game that you'll never get bored of, even though the concept is relatively simple.