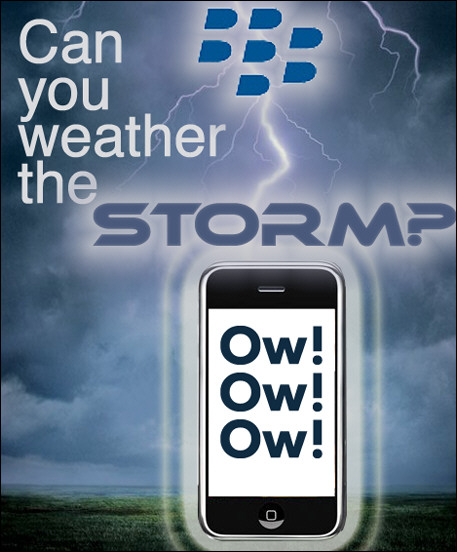 It seems Research in Motion's in-development touchscreen phone, the one that RIM's engineers have supposedly nicknamed the AK (Apple Killer) may already have a REAL NAME: the BlackBerry Storm.

Update: Sometimes you gotta work with the info you have! Since posting this, I'd say it looks like I'm 50% right. STORM definitely is/was the internal codename for RIM's touchscreen device... saying it'll be the final brand they launch with - maybe a bit premature (though with such a cool name it would be a shame for them not to use it! Bets are it REMAINS the go to market name). Turns out the snapping up of the blackberrystorm domains is from a registrar other than the one RIM normally uses, signaling it's somebody close to RIM knowing the codename that grabbed these in hopes of getting a small cash out down the road should the name stick. Does this news suck? NOPE... at least now we have a name to refer to this new device by other than "touchscreen BlackBerry" or "AK".  And in this case we have a Silver Lining, Read This Full Post - if there isn't a touchscreen device called the STORM, you can win a BlackBerry Curve! Just login to CrackBerry and leave a comment on this post. If STORM never makes it from being just a codename and into a final product name, your odds of winning just went way up! **

You could call it a hunch, you could call it insider information/speculation, or you could call it a fact.  Actually, you can call it all of the above. It's not just that we've heard thunderous rumblings of the Storm name from trusted peeps, but hit up any domain Whois Look Up service and you'll find every domain name for BlackBerryStorm is already registered.

BlackBerryStorm.com was registered in late 2007 and then on January 31st 2008 the rest of the domains (.net, .org, .co.uk, .mobi, etc.) were all registered. The Whois info has been protected, but this is a pretty solid indicator that a marketing/branding decision in regards to the touchscreen BlackBerry have been made (above and beyond just an internal codename for the device) as someone has now secured the domains while remaining somewhat secretive in their plans (cough cough... RIM... cough). Hopefully the name sticks - I'd love to own a BlackBerry Storm. BlackBerry Thunder could be cool too, but just doesn't quite have the same ring to it.

What's funny here is that when it comes to the sooner-to-be-released BlackBerry 9000, the name game appears to be less clear. The 9000 has internally been referred to as the Meteor (RIM has a history of picking galatic codenames for internal reference to devices - remember the Pearl 2 was the Komet), but most feel that it won't hit the market as that. Maybe it will just be the 9000, with RIM saving a cool sounding name like the Storm for a break-through product that a touchscreen BlackBerry promises to be. Regardless, we're still holding a contest to guess the 9000's name.

As for the BlackBerry Storm rumor, I'm very confident in it. Yes, like all bloggers I've made some rumor-mill mistakes before, but in this case I think my odds of getting it right are pretty solid. So much so that I'm willing to back it up. I switched up to a new BlackBerry 8320 a couple of weeks ago, but my old 8300 is still sitting here and is looking minty. Login to CrackBerry.com and leave a comment on this post. If I MISS on this rumor and we don't see a touchscreen device called the BlackBerry Storm, I'll personally send a lucky winner my old 8300.

What do you think of the name?