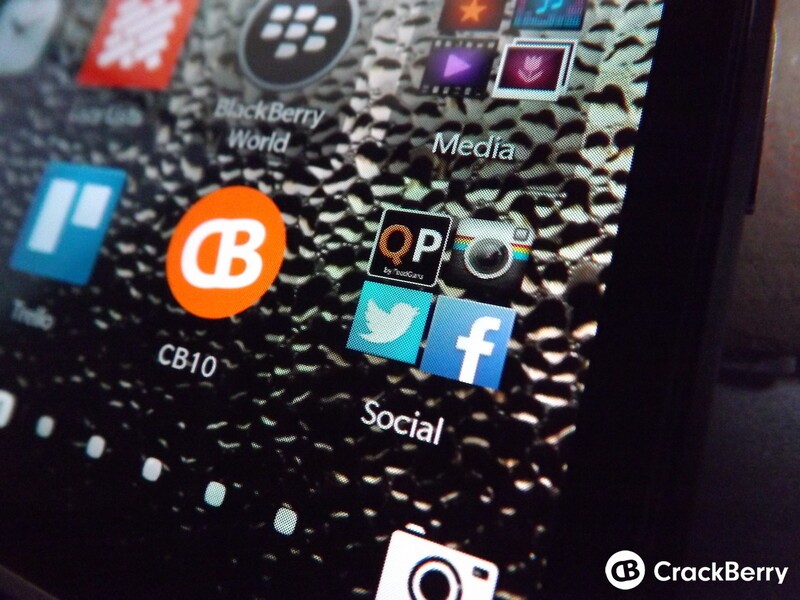 When it comes to social applications for BlackBerry 10 we've pretty much got access to them all now since OS 10.2.1 allows for the easy installation of Android APK's. Of course, there are a few that will automatically be at the top of the list - such as BBM, Facebook, Twitter, foursquare and LinkedIn - all of which are native to BlackBerry 10.

Most of us will be more than acquainted with the aforementioned ones so I'm not going to bore you with more information on those. There are however a nice selection of social apps - many of which we have featured in detail here on CrackBerry, but all of which are worth considering a download depending on your needs.

When it comes to an alternative to the native Twitter app for BlackBerry 10 you can't really get much better than Blaq. With full Hub integration for notifications, it offers more features than the native version and also gives your Twitter timeline a totally different look and feel. Introduced in the last update was a light theme but the black one looks awesome and will be kinder on your battery.

With real time Twitter streaming, BBM integration and easy gesture based controls for retweeting/replying etc the whole Blaq experience is quite beautiful. It may cost you a few bucks but it's money well worth spending if you ask me.

The name of the app is very apt with this one. Every wanted to post the same status update to more than one social account? You can with QuickPost and it works a treat.

Once the app is open you just type in the text you wish to share and select from the five tabs at the top of the screen which services you wish the post to go to. These include: BBM, Facebook, Twitter, LinkedIn and your BBM Channel. You also have the option to attach a file and there are on-screen tabs for # & @ to make life easier for you.

All in all, a real gem of an social app.

If you're not familiar with Skype you must have had your head in the clouds. The BlackBerry 10 version does a great job of allowing you to message and phone friends around the world at no cost.

The only downside I find with Skype is the notifications are not very loud. The app is an Android port and I suspect this is the reason why. With BlackBerry 10 being over a year old now I doubt we'll see a native BB10 version but to be honest it's not really as urgent now as we have cross platform BBM which allows for the same features and more. For many folk though it will still be a must have app to live on your BlackBerry.

If you want Instagram on your BlackBerry 10 device you can do so thanks to the easy loading now of Android APK's. However, I choose to use iGrann instead which has been natively built for BlackBerry 10. If offers all the same features as Instagram but just with a BlackBerry feels to it.

Uploading images is just as simple and in fact I dig the fact that with iGrann you can use the photo editing software that is baked in BlackBerry 10. It doesn't offer as many filter options as Instagram but for ease of use I love it.

With the tabs at the base of the display you have instant access to your feed, searching, uploading, notifications and your profile - which you can edit if you need to. With notifications getting pushed into the BlackBerry Hub it's as good as you can get if you ask me.

Like with Instagram, if you want Vine on your BlackBerry you can load up the Android version. Once again though, I prefer a native BlackBerry 10 app - Whine which we took a look at on video a short while back.

As far as I can tell it does everything that Vine does, but we get a beautiful black and green user interface and it feels a bit more tailored to us BlackBerry 10 folk than the Android version.

If you don't currently use Vine this is good reason to start. It's free too which always goes down well!

Last but not least is Neatly which is another Twitter application for BlackBerry 10. Although Neatly doesn't support notifications to the BlackBerry Hub it does offer users a huge amount of customization in terms of what you want to view on Twitter.

Here's just a few of the tweaks you can make:

Once again - with a nice Black UI and ease of use you may want to consider looking at Neatly a bit more in depth.

There we have it - some nice alternatives to the social apps that most of us first think of. Are you favoring any we've missed off our list? Feel free to let us know your favorites in the comments.