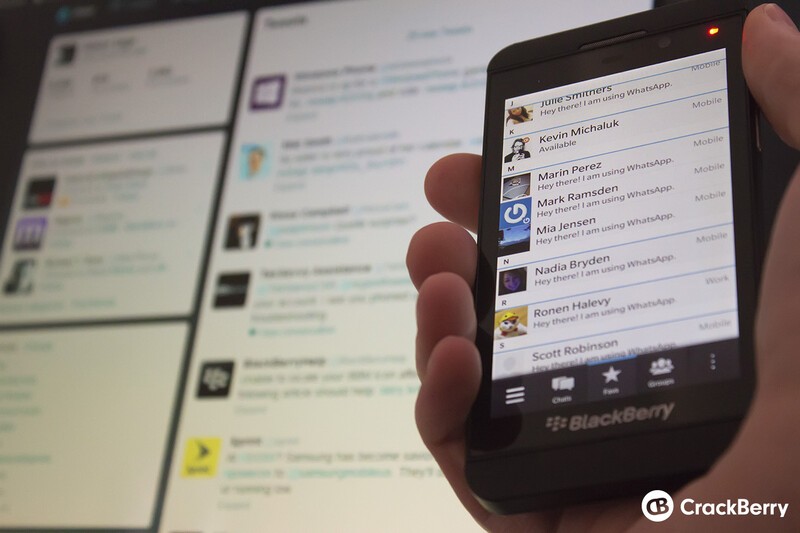 BlackBerry 10 comes loaded with a ton of social tools out of the box, including Twitter, Facebook, Foursquare, LinkedIn, and BBM apps, but for those particularly active social butterflies, there are a whole bunch of apps in BlackBerry World just for you. From blogging to instant messaging to simply seeing what folks are up to, there's an app available on BlackBerry 10. We've picked out the best ways to stay connected with everyone you need to on BlackBerry 10.

Trapeez is a Tumblr client made by the same fine folks that made the Blaq client for PlayBook. Though we’re still waiting on Blaq on BB10, Trapeez does an equally fine job at flipping through your favorite Tumblr blogs, publish quick and simple posts on the go, and follow newly-discovered users. Share and like functions are both in place, as is the ability to drop quotes, pictures, and links into posts. Stories can also be posted in a chat format, so other readers can leave their two cents.

IM+ Pro is an instant messaging client for BlackBerry 10 that allows users to log into multiple networks at once and keep tabs on their various contacts. This includes popular networks like Windows Live Messenger, Google Talk, and Facebook, as well as more obscure clients, like ICQ, VMig33, Kontakte, and others. Definitely pick up IM+ if you’ve got friends scattered across a wide variety of networks.

Keek is a video-based social network. Users submit short, snappy video clips from their phone, check out what their friends have posted, and leave comments. There are plenty of tools to help find people to follow, based on either popularity, subject, or curated suggestions right from Keek. Of course, your Keeks can always be shunted out to Facebook and Twitter, if you like.  The web version is very robust, and complements the mobile app nicely. Keek is the kind of thing to check out if the idea of Vine seems interesting to you.

Badoo is a location-based dating app, where users can scroll through a vast grid of photos of eligible singles. Badoo is an Android port, but performs very well. The menu button in the top-left provides easy access to all of the important sections, including incoming messages, requests, and access to the settings menu. Badoo is free, but operates on a premium currency system, so users can buy their way into premium visibility spots and gain access to a handful of other communication utilities.  The app is location-aware, so you can find singles based on their proximity, assuming they have their accounts open to that kind of thing.

Buffer is a tool that lets users eke out stories to their social networks on a steady, ongoing basis. Through the web interface, Bufferers set ideal times to post, or let the system figure out when to publish for maximum pick-up. The only real downside to Buffer is that because it’s an Android port, the Buffer isn’t included in the system-wide share menu. Facebook, Twitter, LinkedIn, and App.net are all supported, so you can blast out links to all of them simultaneously, or be a bit more selective. If you tend to be an over-sharing type, check out Buffer.

WhatsApp is a cross-platform instant messaging client that has quickly found a fanbase among those that wanted the joy of certain BBM features elsewhere. WhatsApp has activity indicators so users can tell when others have been active, if they’ve received messages, and when they’re typing replies. There’s full support for emoticons and organizing users into groups. The favorites section is automatically populated by contacts identified on your device by phone number to be WhatsApp users. You can set your own user status to anything you like (though there are plenty of helpful presets immediately available). You can share pictures, videos,voice notes, contacts, and locations, to boot. If Google Talk and the other official instant messaging clients don’t do it for you, WhatsApp is a good second stop. Get a closer look at WhatsApp in our hands-on video.

Untappd is a social network for avid beer-drinkers. You can find your favorite brews, rate them, add friends, and give them a virtual cheers to whatever they’re drinking. Locations can be attached to beers you’re checking into, so you can share your brews out to Foursquare too. That location-awareness even lets you find bars that might have a particular favorite beverage in stock. Over time, Untappd figures out your drinking habits and can suggest new beers that might be up your alley. The user interface on Untappd is really sharp, and I find it's a great way to add a new twist on the same ol' getting drunk rigamarole.

Feather Duster isn’t so much a tool as it is a social media toy. Users designate certain keywords as Connect or Flow points, and before long small lights start traveling between them based on how often those words are being used on Twitter. Along the bottom of the screen, sample tweets pop up to give a glimpse as to what these tweets look like. If you’re professionally into social media, Feather Duster is a really cool way to visualize trends and how they’re relating to one another. Check out our demo from BlackBerry Jam Asia.

Diode is an awesome Reddit app for BlackBerry 10. You can check out your favorite subreddits, leave comments on submissions, upvote, downvote, send private messages to redditors, and submit your own links. It’s an Android port, so you can't submit stories from the system-wide Share menu, but it’s otherwise fully functional. You can sort stories based on how hot, new, or controversial they are, or how highly voted they've been within a certain timeframe.  The addition of a light/dark theme ensures you’ll always have good visibility to boot.

Neatly is among the first third-party Twitter clients for BlackBerry 10. Though some of the features available on the core Twitter app aren't there, such as Contacts and Hub integration, there are some cool tricks up Neatly's sleeve. For one, it generates ratings between you and other Twitter users based on overlapping interest. This should give you a general sense of compatibility and who to follow. Neatly also uses something called Smart Lists, which attempts to separate the wheat from the chaff in your timeline. You can privately set tweets as favorites, and also temporarily mute people you'd rather not unfollow, but would like to shut up for just a little bit. Best of all, there's multiple account support - a must have for real social media busybodies. There's a lot of other stuff in addition to that; you can see our full run-down of Neatly here.

These are just some of the ways to keep in touch on BlackBerry 10. Which social apps do you use?