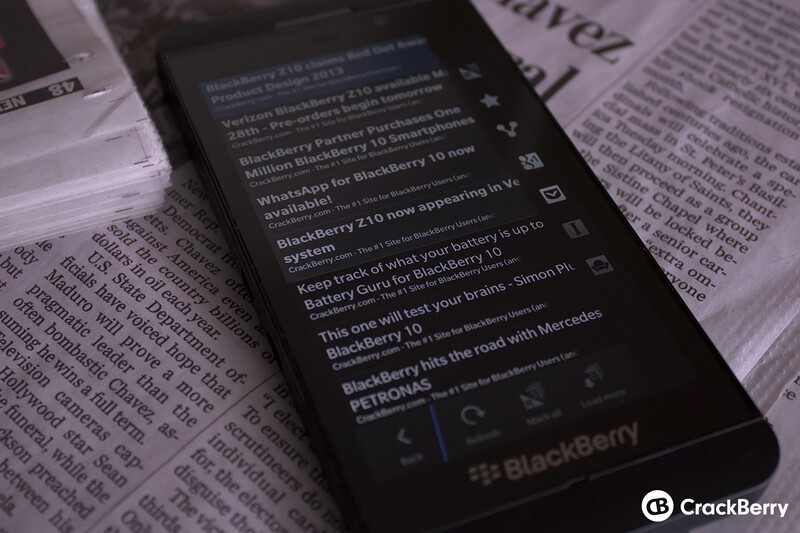 So, I spent a healthy chunk of yesterday rounding up the best news apps for BlackBerry 10, only for Google to announce they'd be shutting down Reader shortly after my post was done. As you can imagine, a lot of my picks were Google Reader apps, which only compounded the frustration of having such an awesome service closed down.

Developers have hung their hat on Google Reader for years now, and for a lot of these devs the rug is being pulled out from under them. The bigger ones, like Feedly, are ready to transition to a stand-alone service. Even with Google Reader shutting down on July 1st, the devs that went through the trouble to make BlackBerry 10 clients still deserve some recognition, even if their apps will only last another three months in their current incarnations.

It's not only Google Reader apps we have below, though - there are already some great news apps on BlackBerry 10 that don't hinge on Google Reader at all. Plus, once Reader fully sunsets, we'll be sure to update this list with whatever stand-alone feed readers step up to the plate. So go on, flip the page, and see what’s new.

gNewsReader is so far my favorite Google Reader app for BlackBerry 10. You can swipe from one story to the next, view individual feeds as well as whole tag groups, star items, and have all of the read and unread statuses sync up. There’s full integration with Pocket, Readability, and Instapaper, so you’ve got alternatives for catching up on stories later. Sharing stories is easy through the system menu, plus there’s a dedicated option for sharing to Google+. Overall, I’m really happy with gNewsReader’s snappy responsiveness and easy use. Definitely pick this one up if you spend a lot of time on Google Reader.

PressReader is a storefront for over 2,100 newspapers around the world. Users can subscribe to publications or buy individual editions. Downloads run for about $0.99 a pop. There’s also a $29.99/month subscription service which gives readers unlimited access to the full collection. Newspapers are organized by geography, then users can flip through the list of available options alphabetically, or search for something specific with the bar at the top. New issues can be delivered automatically if you’re a regular reader, and if you missed an issue, you can always download older editions.

Fiume is a super-simple, pared-down Google Reader client. You can drill down into individual feeds, mark stories to read through Instapaper, or mark them as unread to check out later. Stories can be filtered between all items and all new items, flipped through with swipes or the previous/next buttons at the bottom, and viewed in brief, mobile, or full web formats. The biggest downside here is that you can’t star stories for future reference. Ultimately, Fiume is a simple experience with minimal noise and high responsiveness - a great option for those that want to keep things to the point.

News360 is an aggregator that allows users to define interests to follow, and provides multiple sources for the same story. This means users get a full-spectrum perspective (a 360-degree view, one might say) of the news. Excerpts of stories are provided in plain text, and viewed in their entirety thanks to the seamlessly embedded web browser. The only real downside here is that the app was originally made for PlayBook, so you’ve got to use it in landscape orientation.

The Reader is a slightly more stylized Google Reader client for BlackBerry 10. For example, a datestamp follows you as you scroll through a story feed, and a toggle for light and dark themes is always at the ready when inside a story. Stories can be read on a per-tag or per-feed basis, which isn’t the case for all Google Reader apps on BB10. Along with options to star stories and share via NFC or other channels, users can mark stories for reading later through Instapaper and Pocket integration. The Reader also uses some rather fetching icons. Hopefully they’re pretty enough to distract you from the odd spelling irregularity.

Taptu is an Android port of a popular feed reader that earns big points for its user interface. If you’ve ever used Pulse News, you’ll know the drill; Content channels appear as strips which can be scrolled through horizontally while the other feeds stay static. Every feed also has a search option handy so you can quickly find specific stories. Pocket and Instapaper are both supported, as well as Taptu’s own bookmarking service. Users can add new content channels from the curated catalog or manually punch in RSS feeds. By plugging into your Facebook, LinkedIn and Twitter accounts, Taptu can also haul in links that are making the rounds in your social networks.

Many publications have their own dedicated BlackBerry app, but so far my favorite has been Al Jazeera. It has a great finger-friendly interface with large images for each story, links to live video and audio feeds, plus an easily accessible navigation menu to a wide range of subject matter. Stories themselves have share menus readily accessible, support in-line video, and a favoriting system for future reference. If you’re looking for professional world news, this is a great place to start.

Though most of the Google Reader clients here allow you to save your stories to Pocket, none of them let you see all of your pocketed articles. Luckily, a third-party solution has stepped in, offering full offline reading and filtered viewing by tags or read/unread status. Sharing from ReadItNow is extensive, with easily-accessible options for Evernote, Springpad, Buffer, and the usual networks like Facebook, Twitter, and Google+. The user interface has a fully native look and feel, plus nothing else on BlackBerry 10 is bringing this kind of utility to avid web readers.

Daily makes a name for itself in BlackBerry World with its tasteful layout and sharp fonts. Users can quickly swap between large and small serif and sans serif fonts, and flip between stories with large, finger-friendly previous and next buttons. Though you can’t view feeds by tag, you can edit the tags associated with individual feeds. The usual filters are there for viewing by all items and all new items, as well as the ability to add stars. Daily is a fine app to pick up if you’ve only got a handful of feeds to keep tabs on and want them to look particularly good.

Obvious pick is obvious. Get all of the best CrackBerry has to offer in the palm of your hand. Forums, Passport integration, post commenting, and easy navigation for our multitudinous sections makes CB10 a no-brainer for any BlackBerry owner.

So, how do you guys get your news fix on BlackBerry 10?