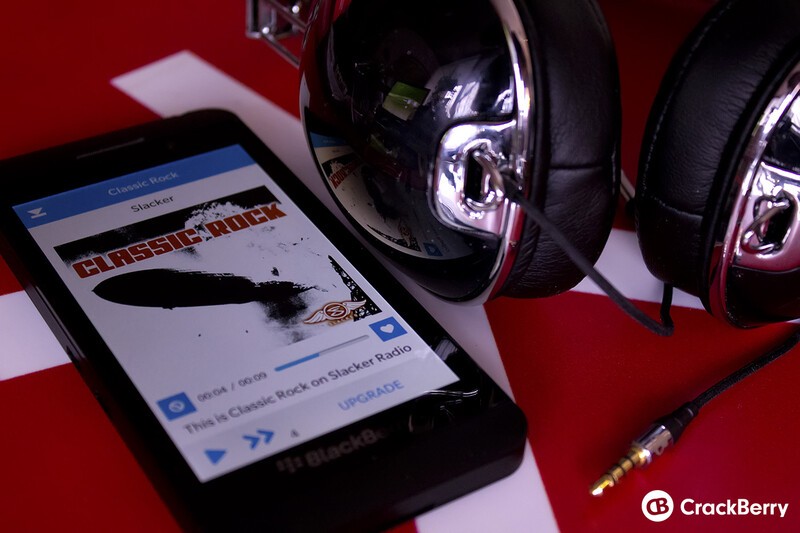 The BlackBerry Z10 is a lean, mean, music machine, and BB10’s growing app ecosystem has given us even more ways to enjoy, share, and create audio. Sure, there are plenty of ways to simply listen to music, but there are plenty of options as far as how social you want to get about it, whether or not you want to be able to pull up tracks on demand, or if you’re cool with letting someone else curate a station for you. Plug in those headphones and dig into these top-notch music and audio apps for BlackBerry 10.

Songza is an Android port of the incredibly awesome free music streaming service. When you first boot up Songza, it detects the time of day (and in some cases time of year) and offers a selection of things you might be doing, such as cooking dinner on a Tuesday night, or kicking off the weekend on a Saturday morning. From there, users can drill down into specific moods and eventually find some absurdly specific playlists to tune into. There are no audio ads (though there are text banners), and you can’t pull in specific tracks on demand, but between the playlists offered by Songza and the community at large, you shouldn’t be at a loss to find something you’re interested in. Because Songza on BlackBerry 10 is an Android port, you won’t get any hardware playback control, but everything still navigates smoothly on the software side.

TuneIn Radio has continued their presence on BlackBerry with a brand new BB10 app. Users can find traditional radio stations by location or genre, subscribe to podcasts, and add stations as favorites. When listening to a station, you get a live view of what’s playing now, and can discover new stations through the Related tab. Unlike many music apps, TuneIn Radio on BlackBerry 10 responds to pause/play input through hardware and in-line headphone controls. TuneIn radio also plugs into BBM, so you can broadcast which station you’re listening to much like the native media player does.

Pacemaker is an awesome and robust DJ application that made its debut on the BlackBerry PlayBook and has since been optimized for the smaller screen on the BlackBerry Z10. DJs can mix, crossfade, scratch, and tweak any track stored locally on the device. More involved distortions in pitch, bass, treble, tempo, and other effects can really help you create something unique once you get the hang of things. It even has split output support so you can listen to something different on the headphones as what’s being pumped out to the big speakers. It can be a bit challenging for those that don’t have any experience in this kind of stuff, but it does offer a fine gateway for those that hadn’t considered DJing due to the niche technical jargon surrounding the whole process, not to mention the expensive equipment traditionally involved. You can pick up Pacemaker as a universal app that also runs on the PlayBook for $9.99, or just the Z10 version for $4.99.

Slacker is a hugely popular on-demand music service for BlackBerry 10 and other platforms, and their app is fantastic. Though the UI follows closely in the standard Cascades layout, it has a very distinctive style in and of itself. Users can flip through stations in the catalog, mark them as favorites, and have what you’re listening to shared out to Facebook. You can listen for free, so long as you’re willing to get through the occasional audio ad, or you can pay $3.99/month for unlimited skipping, no ads, and offline caching, or go big with Premium to get all that and music on demand for $9.99.

Nobex Radio continues to be a top-notch music app for BlackBerry, featuring a smooth, Cascades-style user interface, and a wide selection of streams from traditional radio stations. Users can mark stations from all over the world as favorites and share web links to audio streams. Users also have a fully-categorized selection of podcasts to subscribe to. Nobex makes use of hardware playback controls, and has a sleep timer, much like TuneIn Radio (though no alarm function). BBM status can also be updated with whichever radio station you’re listening to.

SoundNine is a third-party BlackBerry 10 client for the popular SoundCloud audio network. From here, you can log into your SoundCloud account, see what’s recently been posted by the artists you follow, listen to what’s popular, or search for specific users. You can’t upload from the app yet, but there is timeline commenting implemented, so you can see what people have to say about specific parts of a song and leave your own thoughts. You can download SoundCloud tracks that have downloading enabled, and for the ones that don’t, there are links to the excellent mobile site where you can buy tracks from whereever they’re linked.

8tracks is kind of a love child between Songza and SoundCloud. Users upload audio content, and create playlists out of it. The tracks can’t be pulled up on demand, which seems to get around any questionable legality. Mixes are categorized with multiple tags, allowing you to hop between mixes based on similar themes. These tags can be as simple as band names or song styles, or base more on moods. 8tracks on BlackBerry 10 is an Android port, so you won’t see anything like BBM integration, but everything still streams perfectly fine, and you can leave comments on your favorite mixes. The only real downsides here are that you’ll have to deal with banner ads along the bottom of the screen, and there’s a bad case of Notification tray spam.

Deezer is a great way to access cloud-stored music. Users upload their tracks to their Deezer account, or access the 20 million-odd songs that are available, and curate their collection as they will. Songs are organized into playlists which can then be shared with other friends on Deezer. Tracks can be cached locally, which is handy when you’re in a Wi-Fi zone and you know you’re going to be leaving LTE coverage. The app is a port from Android, but operates very smoothly. The only downside here is that you need a premium subscription in order to do anything particularly useful.

Podcasts is a dedicated native podcatcher for BlackBerry 10. Though other music apps offer podcast utilities on the side, heavy-duty podcast listeners will likely want to pick this one up.  Listeners can stream or download podcasts found through a vast categorized library, subscribe to favorites, and automatically delete old episodes. The built-in video player is great and offers simple timeline seeking by 30-second increments when streaming. There’s even a bit of Active Frame mojo at work here, so you can tell at a glance if there are any new shows available to download.

Radio Player+ pulls in over 65,000 online streams in a sharp, Cascades-style user interface. You can browse through the directory of genres, flip through the top 100 list, search for a specific station, or manually input the address of an audio stream. Once you’ve found a station you like, it can easily be added to a favorites list for future access. A particularly nice feature is the ability to set a sleep timer on how long to wait until cutting off the stream and an alarm time to start playing - perfect for those that listen to music regularly in bed. The vast majority of these stations seem to be pulled in through SHOUTcast, which is perfectly fine for me - they’ve got one of my few favorite stations there, WeFUNK Radio. The only downside so far is that I can’t pause or play music using hardware or in-line headphone controls.

So those are our top picks so far. Over the weeks and months ahead we're sure to see even more great music and audio apps hit BlackBerry World. As they do, we'll keep you posted of the best ones to check out. For more apps for your BB10 phone, be sure to check out this list of the best games and apps for BB10.

For now, let's leave this top 10 with a couple closing questions. How do you access your music on your BlackBerry 10 device? Are you happy with the native media player, or do you prefer subscription services?