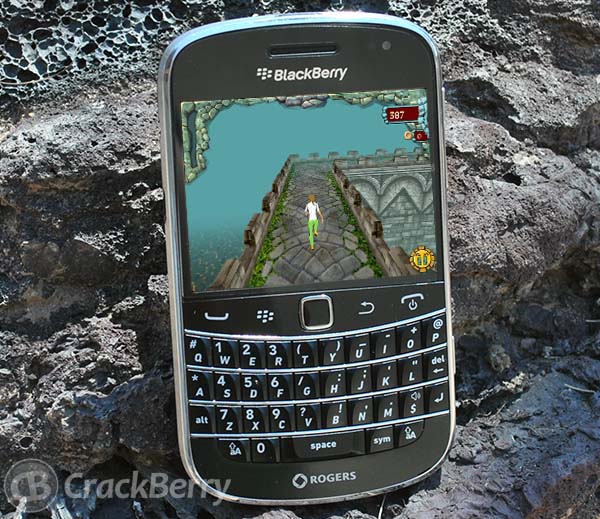 As BlackBerry users, sometimes we have to sit on the sidelines while our friends on other mobile platforms get apps and games that we don't. For whatever reason, some developers just don't want to bring their apps to our devices, even though we would gladly pay for them if that's what it took. (I'm looking at you Instagram, Draw Something, Words With Friends, Skype, Netflix, etc, etc, the list goes on.) Luckily, we have some developers that are seeing the gaps in our App World and trying to help fill some of them. No Draw Something? That's ok, we have Sketch w Friends. No Instagram? That's ok, we have other options. Of course, not all apps have an alternative, but most of us are making do with what we have.

The newest addition to this list of independently developed games is called Tomb Escape by SolverLabs. You may have heard of a game on some other platforms called Temple Run that has gained popularity recently. Tomb Escape is a version of Temple Run for BlackBerry Torch 9810, Bold 9900/9930, and the Porsche Designed P'9981. Gameplay is very similar to the other app, with your goal being to escape from pursuers while avoiding obstacles by turning, jumping, and sliding. There are coins to collect along the way which you can use to buy power-ups to help you on your mad run. While the game doesn't play as smoothly on BlackBerry as it does on iOS,  I have to say it's on par with other BlackBerry games in terms of responsiveness to controls. I had actually downloaded the game over the weekend and played it a bit, then today noticed it had an update which added the ability to tilt your device to move your player as well as support for the trackpad, as opposed to just using the touchscreen to turn your runner. The graphics also improved with this update, and overall I think the game feels smoother. Hopefully future updates will continue to make this game all it can be.

Tomb Escape is free, and definitely worth downloading if you enjoy gaming on your BlackBerry and are looking for something fun to try out. There are in-app purchases available if you're interested in getting more coins, and even though the game itself is free, there are no ads to be seen. I played it on my Bold 9900, and while it's a game I will be playing more in the future, it might be more fun on the larger Torch screen, and I bet it would be awesome on the PlayBook (hint, hint, SolverLabs). Again, this game is available for the BlackBerry Torch 9810, Bold 9900/9930, and the Porsche Designed P'9981 on OS 7.