Tom sent this to me the other day to get up on CrackBerry.com if I saw fit - it's a good piece of CrackBerry humor based on the "Great BlackBerry Outage of 2007" (as I like to call it), and even better, guess what website helped Tom get through his near-tragic day?! Read to the end to find out...

I had a sick feeling when I woke up that morning. It was the day that I thought my dear Blackberry died. I never realized how much I needed and longed for her.

I felt it coming on the night before. I figured, no, she could not be sick; "all would be better in the morning," I thought. "Why," I wondered "was my sweetheart, my Blackberry, just laying there, no beams, no vibrations, and no emails?" I could feel the beads of sweat building on my forehead. I felt a bit clammy. I kept picking up my trusty Blackberry every few minutes, just to feel for her pulse, her warmth — but nothing. 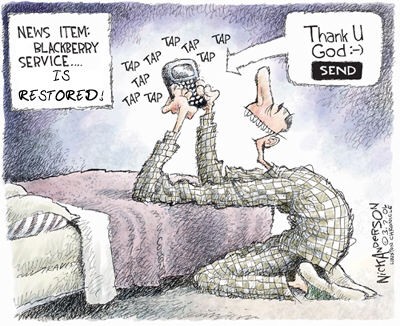 I rolled over a few times during that long night to caress my lethargic Blackberry but she had no life. Up until that point, she had always lit up any room she entered. That night her trusty face provided a dim glow in my bedroom but no emails. She was as lifeless as my old eight-track tapes piled in the corner. "All will be fine in the morning," I prayed, as I rolled over and attempted to get some sleep. I wanted to be strong in the morning for Blackberry; I felt she needed me as much as I needed her.

With the first beam of the morning sun streaking across my bed, I once again stretched out to pull Blackberry close. I could feel the blood drain from my face as I looked wishfully into her screen with such great anticipation of seeing emails - from my colleagues in China a world away or my Wall Street Journal electronically nestled on my Blackberry porch. But I gulped when the screen did not even light up, not even as much as a wink!

I stumbled out of bed in a stupor just to get my sweet Blackberry quickly attached to her battery respirator. I plugged her in for what seemed like hours, but were really only minutes; and much to my relief, Blackberry began to regain her color. Her screen was aglow again, just like the first time I looked longingly into her face. Once again, she was lighting up the room!

However, joy quickly turned to despair as I looked at Blackberry's face, only to have just the same messages from the day before, staring back at me. I gasped, "Nothing new? How could this be happening to me? Why me?" I screamed to no one in particular.

I was in no mood to talk to others. The others in my household had grown accustomed to me, my thumbs firmly positioned on Blackberry, with my face silently starring into her face. It was a strange sensation, as I turned first to my son and then my daughter, pleading for their help and understanding. My son sounded like one of the Soprano's as he looked up in disbelief and asked, "Areyoutalkingtome?" My daughter asked, "Dad, Dad, is that really you? Have you given up on Blackberry forever?"

It was at this moment that I felt life, with all its hums and vibrations, coming back into my Blackberry. It was like a scene from the TV show ER, where they scream, "Clear!" as an electric shot was sent through Blackberry and it jerked her back to life. "Blackberry!" I cried, "You're back!"

Since that fateful morning I have held Blackberry closer and tighter than I ever have in my life, caressing her with my thumbs, as if my lover had just risen from the dead. As Blackberry and I stood there, the voices of my children seemed to fade off into the distance. I promised Blackberry that she had nothing to worry about because I would never be diverted by human contact again. My attention would forever be distracted downward under the breakfast and conference tables and my glances would only be directed at her loving face.

Like most Crackberry addicts, I thought it was just me who felt the desperation of the sheer thought of losing my dear Blackberry. I found out I was not alone. Some five million of us subscribers were forced to think of life without our addiction and take stock in our over-reliance on this new technology as our Blackberries were blacked out last week.

I did learn that, like every addiction, we are not alone and there is help out there if you willing to reach out; www.crackberry.com helped me get through this crisis.
Addiction or not, may my Blackberry never leave me again.

Tom Watkins is a business and education consultant. He served as Michigan's State superintendent of schools 2001 to 2005 and President and CEO of the Economic Council of Palm Beach County, FL 1996-2001.Read his internationally recongized report: The New Education (R)evolution at www.nacol.org He is accepting condolences from other Blackberry users at: [email protected].