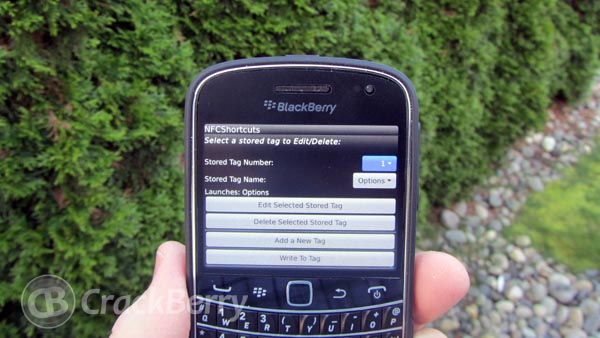 While NFC technology has been around for nearly decade, it’s only been within the past couple of years that we’ve seen it being supported in the mobile world. In this form we see NFC having many different uses, some as simple as checking in with Foursquare, assisting with Bluetooth pairing or even to make a mobile payment. A few months back, Fonware released NFCShortcuts, which allowed users to set up shortcuts or applications to launch with a simple tap against an NFC tag. Additionally, you can pair NFCShortcuts with Fonware’s ShortcutMe to create a marco-tastic NFC experience, such as sending off SMS or emails for you, changing your sound profiles and more. Imagine tapping your BlackBerry smartphone against your desk at work to turn on and access the company WiFi or using a tag on/in your car to turn on Bluetooth – it’s quick and convenient. The next thing you know, your home or office will be littered with tags and you’ll find yourself becoming a tapaholic. Earlier in the year, Adam had a blast discovering how easy NFC was to use and how far you could potentially go with it.

Normally, NFCShortcuts would go for $2.99 in BlackBerry App World but, for today only, you can get it for a mere $0.99. Keep in mind that this covers the NFCShortcut application only, not the NFC tags that are required. Fonware suggests that you pick up Mifare Ultralight tags. With this kind of power in your hands, what would you use NFC for? Let us know! Check out an NFCShortcuts video after the jump.

[ youtube link for mobile viewing ]
From the new Editor's Desk