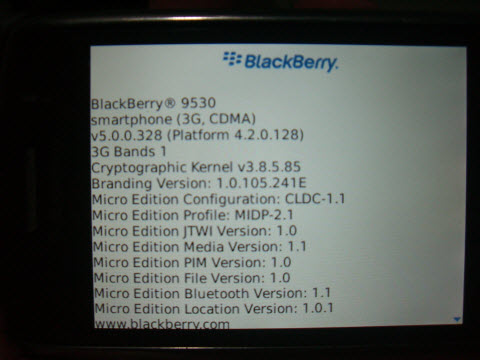 * Update 3: LOL.. that was fun for 24 minutes. LOOKS LIKE THE OFFICIAL IS UP! Check your Desktop Manager Software! *

* Update 2: Looks like megaupload is letting the file download again... keep tabs on the comments in case the link doesn't work for you anymore *

* Update: wow... looks like megaupload has some sort of attack system in place.  The .238 file got 243 downloads in about 30 seconds, and I think we must have tripped some sort of hacker attack alert as they've temporarily suspended the file (it's still in the account). Watch the comments below for download mirrors. *

So it's Sunday night, October 25th, and we know BlackBerry Storm 9530 owners are sitting on CrackBerry by the thousands waiting for Verizon to officially release OS 5.0.0.32x for the BlackBerry Storm 9530. Leaked info leading up to the this official release has been kind of weird... sometimes stating the official version would be 5.0.0.323 (which we already leaked the other day) and other times stating .328. Some info put the push at 7pm EST tonight, which has passed, the change log puts it at 10pm EST (any minute now) so in true CrackBerry fashion we've dug up the goods for you so you can get a head start. At the link below we've actually got two newer 5.0 builds... 5.0.0.327 and 5.0.0.328. They're both running the same platform version (4.2.0.128) so are likely near identical, so it's probably best to go for .328 but you can try them both out if you like.

The official Verizon release should drop any minute or hour now, so even hardcore Stormies shouldn't feel bad if at this point they want to hold out for the update to come through BDM. But if you want it now, you can grab the latest and greatest below!