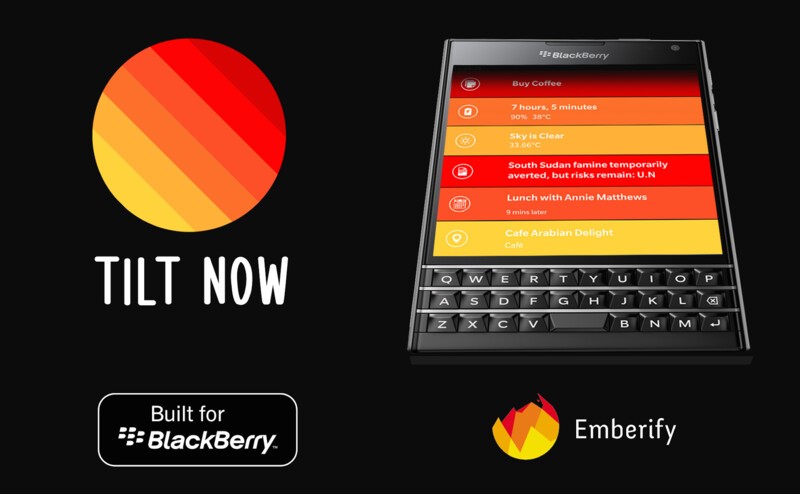 Are you BlackBerry 10 users ready for some more Tilt action, this time with a twist on the original Tilt application? Tilt Now has hit BlackBerry World today and is all about giving us BlackBerry users a quick look into what is happening in our day - in that beautiful Tilt way.

As you'll see in the press release below there's also a ton of customization available within Tilt Now. I'm going to be testing this one out any moment now so we'll bring you a quick hands on video in the next day or two.

Pune, India (December 15th, 2014) – Emberify launches Tilt Now for BlackBerry 10. 'Tilt Now' is a utility, assistant that gives you a quick highlight of the users entire day based on context. It also offers a Tilt mode based on BlackBerry Sweden's (TAT) Tilt UI.

"At Emberify we have been working to bring lots of user customizations to BlackBerry Sweden's Tilt UI. Also with 10.3 Lift to wake the device Tilt Now gets an enhanced use case," says Shashwat Pradhan, BlackBerry Elite Developer and the Founder of Emberify. Tilt Now also is Built for BlackBerry certified and is currently available on an introductory price for two weeks.

Availability: Tilt Now for BlackBerry 10 is available on BlackBerry World for $0.99 as an introductory offer worldwide.

Keep an eye on BlackBerry World as Tilt Now should show up for all regions in the next 24 hours. Hit up the comments if you have any questions regarding Tilt Now. The developer is already active answering them!