We gave you a teaser of Tilt for BlackBerry 10 recently and judging by your comments it's an app that plenty of folk are interested in. Tilt is now available in BlackBerry World and you can pick it up for all BlackBerry 10 devices - which is always a bonus.

The general concept of the application is to provide you with a bunch of information at your fingertips, but it's also cleverly disguised as a blank screen until you actually tilt your BlackBerry.

The ideal scenario for this would maybe be in a business meeting where you discreetly want to check out the content that the app provides. Whether the BlackBerry is face down or face up all you need to do is tilt the device and the blocks of content will appear in beautiful colors. The more you tilt - the more content is shown.

The information that Tilt provides is as follows:

Tilt is based on BlackBerry Sweden’s tilt UI concept - adapting to your phone’s gyroscopic orientation you will get the most important information only when you need it. As you'll see in the video - you do have the ability to switch off the 'tilt' option if you want - therefore having all the information on screen - all of the time. 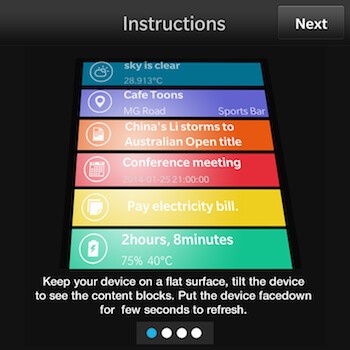 Loading up the app for the first time you'll be given a brief set of instructions - only four pages. Once these have been read you'll be all set to go.

I've been playing around with Tilt for a few days now, both on my Z30 and Q10, and although it won't be for everyone, it is an amazing app that not only looks great, but performs as smoothly as you would expect.

Tilt is a contextual app with an adaptive user interface. It manages the user’s news, weather, priority notes, battery stats, calendar and places. The app is built on the proprietary Sidekick Engine, the same contextual backend used in the award-winning app ARKick. It is used to manage the priority of all the users contextual information.

The app features an adaptive user interface based on BlackBerry Sweden’s Tilt UI concept. Based on the phone’s gyroscopic orientation the information is displayed to give a non-obtrusive experience to the user.

“Combining Tilt UI with Sidekick Engine enables us to give the user the right information at the right time so they can focus on the world around them,” said Shashwat Pradhan the co-founder of ReFocus Labs.