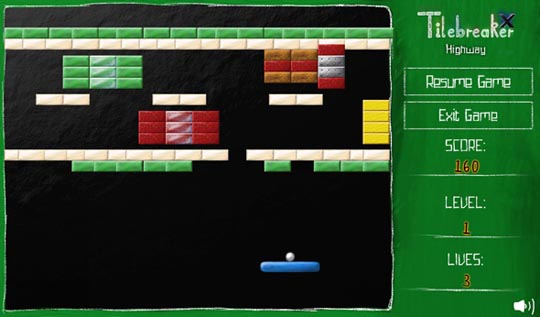 As CrackBerry addicts we're all aware of a little game known as BrickBreaker that comes preinstalled with our devices. Who would have guessed that a modern version of the classic arcade game Breakout would be the cause of so much procrastination and frustration. No matter what, a BlackBerry device just isn't the same without it. So when this game happened to pop up in App World it was a no brainer that I immediately downloaded it.

Tilebreaker X by Marius Heil is a Brickbreaker like game for your Playbook. For all you newbies out there the object of the game is simple. Using only a paddle and a ball you need to break all the tiles to clear them from the board. It sounds easy but half the time its easier said than done especially when you're playing on a larger scale. The only obvious difference between the two is the hidden powerups that descend when you break a tile are not exactly the same (I miss the laser). However, it's still enjoyable.

The great thing about this game is the option to change the controls. You have the choice of using your finger to drag the paddle, your thumbs to move the paddle by tapping on the sides of the screen, and, my personal favorite, using the accelerometer to tilt the device to move. I have to say it is hard to use the last one but touch controls are very responsive and you can adjust the sensitivity. I even played on the train ride home.

Currently there are two versions available. There is a free version with less levels and powerups and the full paid version for $1.99 with all 41 levels of brickbreaker like goodness. I have ro say the graphics are decent and it gets the job done. Not too shabby if you ask me and I've been playing this game in its many incarnations since I was a kid (Anyone remember Alleyway on Gameboy). You'd think I'd be better by now. So why not pick this up today and continue to ignore your work. Don't worry i won't tell your boss.