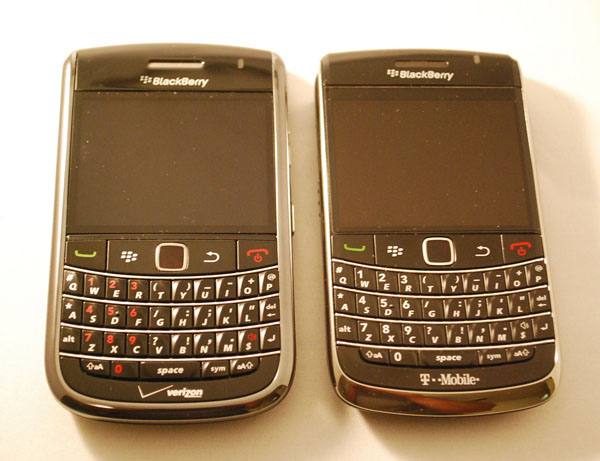 To say I was excited to receive my BlackBerry Bold 9650 would be an understatement. A long-time Verizon customer, I had been a CDMA user since I got my first BlackBerry. Where I live Verizon service is by far the best, so I was more than anxious for the latest device to get in my hands. After using my Tour for quite a while, I jumped over to the Bold 9700 (using T-Mobile) and fell in love. The device is amazing on many levels. Mostly how it feels in your hands and the insane battery life. There have been times however (many, many times) where I missed Verizon and my CDMA devices. Venturing out into some areas I completely lose service with T-Mobile, while Verizon is still going strong. I find myself at times carrying two devices in case I need to make a call while my 9700 is sans-service. I've complained on more than a few occasions (and a podcast or two) on how badly I wanted to be back on Verizon with a new device. Enter the Bold 9650.

When it arrived at my door last week, I couldn't wait to get it out of the box. I made a cup of coffee and sat down at my desk, Bold 9650 in one hand, Bold 9700 in the other - USB cable at the ready so I could fire up the device switch wizard.  As the process ran, I looked over the manual and impatiently waited for things to get done. When the process was complete, I yanked the cable out of the 9650 and started to play. I moved around some icons and got things sorted out. I checked out some of the pre-installed Verizon apps as I  readjusted to the larger keyboard. I was so happy to be back with Verizon that I couldn't put the device down. I plugged it in to make sure it was fully charged since I knew on its first day it would be getting some heavy use.

After trying to get some work done I went about my day, fully-charged 9650 in hand. I already noticed that it was larger and quite a bit heavier than the Bold 9700 I was used to. I never had a problem with the size of the Tour 9630, but coming off a smaller device the 9650 seemed that much bigger. I had some trouble at first with the keyboard as well, but after a few hours I was a happy user again and had adjusted to the size, weight and keyboard of my new device. The next few days I was fine and dandy. I was loving the device and so excited to be rolling on Verizon's network again. As I cranked out my Bold 9650 review I was feeling great, and happy to finally have a great device on a great carrier.

Over this past weekend things started to take a turn however. I was having trouble holding the 9650 comfortably and typing at times. I know it sounds trivial, but it just felt odd and was starting to bother me. I was so used to the small size of the 9700 that this was really starting to irk me. I found myself moving the device from hand to hand, just "inspecting" it and thinking about my now neglected Bold 9700. I started to weight the pros and cons in my head, and asking myself just why I preferred the Bold 9650 ... or if I did at all. My main reason for the switch was obviously the carrier. Verizon service for me is far superior to that of T-Mobile. In my 10+ years I have rarely had times/locations where I have been without service. With T-Mobile however, I find that many locations I frequent have no service at all and I find myself extremely thankful for Wifi in places that have it. This alone has long been my reason for wanted to be back with Big Red. I was also excited to have double the memory. The 512MB on the 9650 is pretty sweet and I can't help but look forward to BlackBerry 6. Then again, BlackBerry 6 isn't here yet, so do I need to use the device now to be ready for it? My battery was making it through the day at this point, but I was still spoiled and knew that my 9700 could get me through at least 2 days without a charge. I actually worried about my use later in the day on the 9650, fearing it would drop into the yellow and the battery would die on me. With my 9700 I never had this issue. Tons and tons of comparisons ran through my head as I went back and forth. What was I really gaining from using the Bold 9650?

I picked up the 9700 in one hand the 9650 in the other. I spun them both around a few times, checking out the weight and feel, and as I stared at them for a minute, I realized that was that. I was officially abandoning my shiny new, barely a week-old, Bold 9650 and going back to my mostly reliable Bold 9700. I had lasted this long with it, and I asked myself how many times I had dropped service and not been able to pickup Wifi (or at least survive until I got back into a decent area) and the answer didn't phase me. Out came the laptop, up went BlackBerry Desktop Manager and the swtch back began (I actually had a load of issues switching back - so it was either a sign or just another story for another time). I looked at the 9650 as my information was slowly pulled from it and I surprisingly wasn't all that sad. As much as I had wanted the device for months and months it just really wasn't going to work out for me and back the Bold 9700 I went.

Now all that being said, I am by no means saying the Bold 9650 is a bad device - I think its' a great device. CDMA users have always got the shaft when it comes to new devices, and this is one of the first they can be proud of. The device itself is solid, it has Wifi, an optical trackpad and a boatload of memory. When BlackBerry 6 comes along this guy will be ready to get it on. For users that don't have the option or the means to switch to a GSM carrier, the 9650 is in my opinion the way to go at this point, and one of the best CDMA devices there is. But ... for users that DO have the option to go with GSM, at this point I feel that is the better way to go. I'll stand by the fact that I think the Bold 9700 is probably the best device RIM has cranked out to date. The small size is easy to hold and carry, the keyboard is easy to type on for almost everyone, and the battery life is truly amazing. Obviously things like carrier and coverage come into play, but when weighing the options, I feel that using the Bold 9700 is a much better route at this point. Sure, life would be easier if everyone just played nice and we could use any device on any carrier, but until then we have to make choices. My choice (for now) is to use the better device on the not-so-great carrier. It has treated me well thus far, and I just feel that the pros of the Bold 9700 outweight the pros of the Bold 9650.

So take this for what it's worth. Its just a rant from my end, but I felt the need to get it out there. We all know that BlackBerry isn't perfect, and I realize sometimes it sounds like we love all devices that come out no matter what. Like I said, the Bold 9650 is a great device, but the Bold 9700 is a better one. BlackBerry suits me and my needs. I don't play games and I don't need fancy novelty apps. I need messaging and thats what BlackBerry does for me. As always, I'd love to hear your thoughts on this or either of the devices. You don't have to leave a comment about how they both are crap and you bought an iPhone or Android phone - we have othersites for that :-)