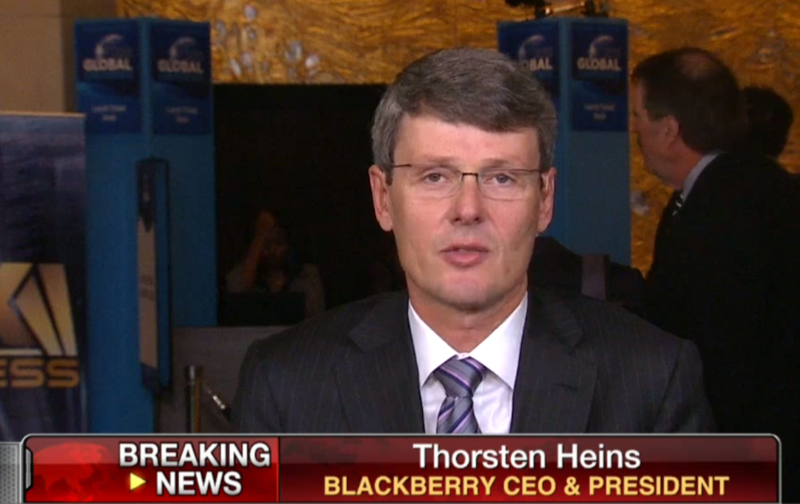 BlackBerry CEO Thorsten Heins has been busy with interviews of late. We saw him sit down with Bloomberg, talking about the BlackBerry Q10 and how it became the fastest selling handset at Selfridges, amongst other things. Thorsten was asked about when we should see the BlackBerry Q10 launch in the U.S., following the successful week launch in the U.K. and he states that the U.S. should expect to see an end of May launch. He goes on to say how the these initial sale numbers, for both the Z10 and Q10, are an exciting time for the company. They certainly are.

When asked about taking back market share, Thorsten states that he's only interested in targeting the "hyper-connected people", always on the go. He's not interested in shooting for the stars. There's a target audience for the BlackBerry 10 products and that's what he's aiming for, that segment of the market.

The topic of Detwiler Fenton comes up once again. He adds that the investigation he requested with the SEC is still on going.

Lastly, Thorsten was asked about which device, the Z10 or the Q10, will be more popular. While we've seen Kevin ask Thorsten which his favorite device is (watch the answer here), he goes on to say that smartphone industry has become a place where many form factors have segmented and it's all about preference. While there are many who want the full touchscreen Z10, we've seen that there many who still want that trademark physical keyboard that BlackBerry is known for and so both models have a place in the company's future.

If you're interested in watching the 6 minute video, check it out below. Thoughts and views are welcome in the comment.