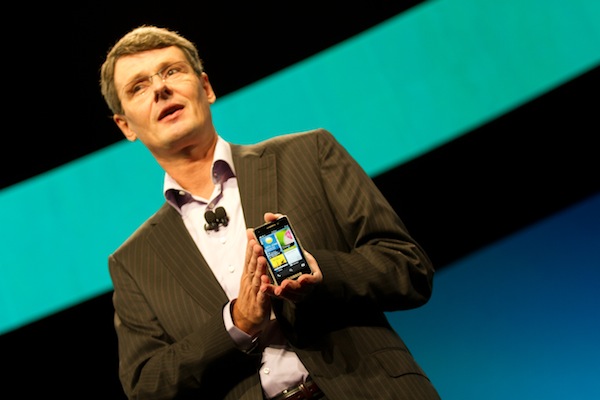 RIM CEO Thorsten Heins hasn't been shying from the media lately. He's given numerous interviews with us as well as other publications, the latest of which comes from The Telegraph. Among the standard banter around BlackBerry 10 that we're all getting used to, Thorsten drops an interesting line that hovers around the licensing of the BlackBerry 10 software. Speaking on the fact that RIM will release only two BlackBerry 10 handsets from the start, Thorsten said:

"We don't have the economy of scale to compete against the guys who crank out 60 handsets a year. We have to differentiate and have a focused platform. To deliver BB10 we may need to look at licensing it to someone who can do this at a way better cost proposition than I can do it. There's different options we could do that we're currently investigating."

So it looks like the option is still out there for RIM to find someone who would want to take on BB10 on a larger scale. There are still a few big names like Samsung that would likely fit that bill. Thorsten isn't saying that RIM won't launch two BlackBerry 10 phones in early 2013 (and more beyond), he's just noting that to crank out 60+ handsets a year they would need to license/work with other partners.

"You could think about us building a reference system, and then basically licensing that reference design, have others build the hardware around it - either it's a BlackBerry or it's something else being built on the BlackBerry platform ... "

Thorsten also says that it's too early to make any big decisions on licensing just yet and that RIM's financial advisors will have to weigh the benefits of doing so.

But is Thorsten Heins seriously thinking about making 60 handsets??

What do you think - would licensing BB10 at this point be a good move for RIM? Sound off in the comments.