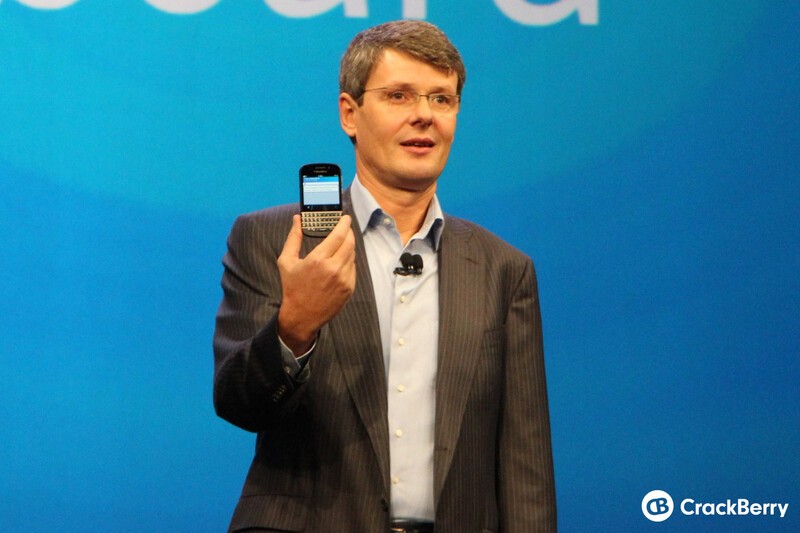 In celebration of a highly respectable earnings report from BlackBerry, I’ve got the AC/DC cranked up playing “Back in Black”.  It has speed, energy, and in that classic rock sort of way it represents the return to profitability that we’re seeing from our friends in Waterloo.

This morning BlackBerry reported Q4 results and held their usual conference call.  We listened.  We live blogged.  Now I’m going to do my best to share my thoughts without writing a novel.  Because believe me ... I could.

BlackBerry posted a surprise profit for the quarter.  On a GAAP basis EPS was $0.18, and on an adjusted basis (excluding restructuring, mostly), it was $0.22.  The adjusted number is what the Street looks at compared to their own models.  Analysts expected the BlackBerry to lose $0.31 per share, so this beat is quite meaningful.

Revenue was $2.7 billion, flat with last quarter and lower than the $2.83 analyst estimate.  However, the company delivered stellar 40% gross margin, boosting the gross profit figure while holding operating expenses approximately flat.  This explains the nice upward moves in profit.

They sold 6 million handsets in the quarter, which is down sequentially, and weaker than analyst estimates of 7.1 million device sales.  That said, the sell through was 7.9 million devices compared to about 8.4 million last quarter.

Service revenue declined about 3% sequentially, which isn’t too bad.  These revenue dollars are slipping away slowly.   More on that later.

Cash performance was stellar.  They’ve maintained $2.9 billion in the bank, which is impressive considering the launch and restructuring expenses they had to deal with in the quarter.  It seems to me  they’ve now turned the corner, operationally, and they’ve got a lot of cash in the bank.  A couple of quarters ago I was very worried about collapsing service revenues, restructuring charges, and the ramp expenses for BlackBerry 10.  They’ve navigated this way better than anyone expected.  That’s a big part of the reason the stock is up over the last few months, obviously.

About one million Z10 devices were sold in the quarter, which lines up bang on with analyst estimates.  Sell through is estimated, in an answer provided by Thorsten, at 2/3 to 3/4 of that amount.  In the Q&A session I wasn’t too thrilled with their answers about sell through because they act as if it’s too early to measure whereas they should have near perfect information.  Every device that gets sold gets registered with a BlackBerry ID (and PIN).  We all know this.

Anyway, some people are going to make a big deal about the sell through being less than 100%.  Those people are fools.  Guess what people?  If sell through is 100% it means there is no inventory in stores, and nobody can buy phones.  You need inventory in the system to operate a business.  Get a clue.  I’m not saying this to CB readers, either.  I’m saying this to those people who are supposed to be professionals and who still don’t get this utterly basic logic.  But that’s another story.

The most impressive metric, to me, was the fact that 55% of Z10 buyers are coming from other platforms

The most impressive metric, to me, was the fact that 55% of Z10 buyers are coming from other platforms.  I’d like to point out that this doesn’t mean purely iOS and Android, although certainly some users are making that switch.  The definition of “other platforms” wasn’t given, but I’m betting it includes feature phones.  So the Z10 may be attracting people who are first time Smartphone buyers as well as migration from other Smartphone platforms and BB6/7 upgrades.  Either way it is an impressive metric.  A few months ago the bears said that BlackBerry 10 stood no chance except with its existing customer base.  This has been proven 100% wrong.

BlackBerry 10 has launched at 60 carriers in over 40 countries.  There are still 30 countries left to be launched at this point.  A total of 220 carriers have approved the Z10 for their networks, and it will be launching on them soon.

The Q10 is now in testing with 40 carriers in 20 countries.  A lot of die-hard BlackBerry users refuse to give up their physical keyboards, and when the Q10 hits the market in April we should see a nice spike in sales.

Thorsten also made it crystal clear that BlackBerry 10 will be a complete portfolio with devices launching throughout the fiscal year.  Specifically, at least one mid-level device should hit by mid year.  Q2 ends in August, so I’d say we are looking at late summer for these new phones.

Subscriber base shrinking, but poised to recover

BlackBerry reported 76 million subscribers at the Q4 quarter end, which is down from 79 million as of Q3.  The loss of 3 million subs is bothersome, but you can’t really say it’s unexpected.  The Z10 had only been on the market for a month by the close of the quarter, and  we’d seen the start of the global decline in subscribers in Q3.  Usually these things just start to accelerate, meaning  that BlackBerry pushed the launch of “the 10” about as far as they possibly could have.  If they had waited any longer the subscriber loss flesh wound would have become more of an gun shot to the femoral artery.

Let’s do some simple math here.  Let’s say BlackBerry sold about 750,000 Z10s to end customers, but still lost 3 million subscribers.  This means about 3.75 million people gave up their older BlackBerry devices, which have service revenue attached.  Does this jive with a 3% decline in service revenue?  Yes.  Because you have to remember that enterprise use has higher revenue, and is stickier than BIS use.

By Q1 I think we should see subscriber losses dramatically slow down.  I don’t think the sub base will grow in the May quarter, but I think it will be pretty much flat.  The Z10 and Q10 will add more users, while certainly some people will still leave the platform.

And as people upgrade to BB10 the company will lose out on service revenues.  But they’ll make up for it with immediate gross margin contribution, which helps EPS.  This is why I think the stock is likely headed into a period of positive financial momentum.  Will this help the stock price?  I think in a logical world it does.  But the world isn’t always logical.

We’re much closer to the starting line than the finish line.  BlackBerry’s comeback has only just started, and we can’t judge it quite yet.

Thorsten spent quite a bit of time talking about the future of service revenues.  He wants the Street to understand that the decline will be slow.   The service revenue declined 3% this past quarter.  I think that decline should accelerate as people upgrade to BB10.  But at the same time there are thousands of enterprises upgrading to BES 10, and BlackBerry will generate revenue by managing other devices too, not just BlackBerry.  This will slow down the decline.

Let’s say it’s a wash.  Let’s say service revenue continues to decline at 3% per quarter. If that’s the case, I think earnings are going to rise tremendously.  Hardware gross margin increases will much more than offset service revenue losses.

This was one of my major fears over the last year and, given the timing of things, I’m feeling much better about what’s happening now.

Of course, Thorsten also wants us to understand that they plan to invent plenty of new services.  He mentioned BBM services, cross platform integration, security, licensing and more. It sounds like all of this is early days, so don’t expect Wall Street to care about any of it quite yet.

Every since taking over as CEO, people have asked if Thorsten is really in charge.  Jim Balsillie left the board, and now Mike Lazaridis is formally retiring his board seat.  There is no question Thorsten is running the company.  No question at all.

There is no question Thorsten is running the company. No question at all

And so far he’s kicking ass.  Sure, I think he could structure the conference calls better.  I wouldn’t start off talking about restructuring programs and cost structure.  I’d start with the juicy bits such as 55% of Z10 buyers are new to the BlackBerry customer family.  But I think the fact that he does start the calls talking about these more boring financial things is an indication of the kind of CEO he is.  He’s operationally focused.  And he’s brought this company back to profitability.

With 100,000 apps, some incredible hardware and a very innovative user interface, I think it’s safe to say BlackBerry is officially back in the game.  No, they probably won’t be as profitable as they once were - at least not over the next couple of years.  But who knows what the future holds.  BlackBerry doesn’t see themselves as competing in the Smartphone market.  They are a mobile computing company.  And there is a lot more to come.  That’s what keeps it interesting.

Q4 was a win for Team BlackBerry and CrackBerry Nation.  Things are back on track.  Back in black.