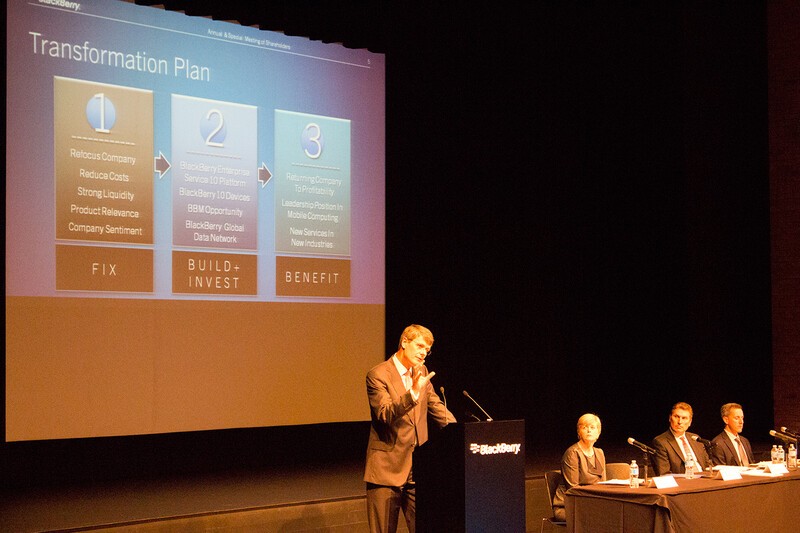 Today in Waterloo, BlackBerry’s CEO presented a message that I feel was very consistent with everything they’ve been saying to date. While this may not have helped the stock much (it’s up marginally today), I think it’s at least positive to see the consistency.

Specifically, there are a lot of people who feel that BlackBerry should get out of hardware, or that BlackBerry should put itself up for sale. Everything that management has said over the last year suggests that neither of these two options are seriously on the table. Yes, they say they are open to all options. But as much as this is technically true, management can obviously only focus on what it feels are its best options, while paying lip service to the idea that it would not reject any reasonable option to improve shareholder value.

The bottom line is that Thorsten Heins sees BlackBerry as a company early on in its transition from a past smartphone leader to a future mobile computing leader. The world of mobile computing is still undergoing massive change, and BlackBerry is only 5 months into its launch of the BlackBerry 10 platform.

In a nutshell, management is irritated by what may be considered overly optimistic estimates for the Z10 early in on the launch. And this is hurting the stock price. But this company has its eye on a much bigger prize, which is to emerge as a leader in “the Internet of things”, also known as machine to machine (M2M) networking and computing.

There are plenty of smart people who have said that BlackBerry should exit the hardware business. But on the last earnings call, and really every earnings call since Thorsten Heins took over as CEO, they’ve talked about the need to be an integrated platform. They’ve also dropped strong hints that they need to prove their own platform before anyone would want to buy it anyway. I think that makes a lot of sense. BlackBerry 10 either succeeds under the ownership of BlackBerry, in which case why would they sell it? Or it fails and in that case why would anyone buy it?

As much as I can appreciate the arguments from those who predict that BlackBerry will exit the hardware business in 2013, it simply isn’t going to happen. So we all may as get on with the story and look at what’s happening next. The Q10 and Q5 rollouts are happening now. The BES 10 growth is beginning.  Secure Workspace for iOS and Android are available.  BBM is going cross platform this summer. The company is committed to investing for growth. We all realize that “investing” means “losing money” for the time being. Wall Street won’t like it, especially when the company won’t be reporting subscriber figures so there will be no easy way to judge the success of these so-called “investments”.

I understand the message the company outlined today. I think it was the only logical message for them to put forward.  My only criticism is that this phase two, the investment phase, shouldn’t only be starting now.  It should have started several months ago in advance of the BlackBerry 10 launch. Time is not on this company’s side, and they can’t afford to take a linear approach to things. They have to attack in full force. They have to strike with all their effort now. They have to hit hard, convince 70-some-odd million BlackBerry users to upgrade their hardware, convince most BES-using enterprises to adopt BES 10, and grow their BBM user base by tens of millions in the next few months to overtake WhatsApp as the mobile IM leader.

Can they do it?  Did you take away a different message from the AGM? Agree with me, or disagree? Have your say in the comments, folks.