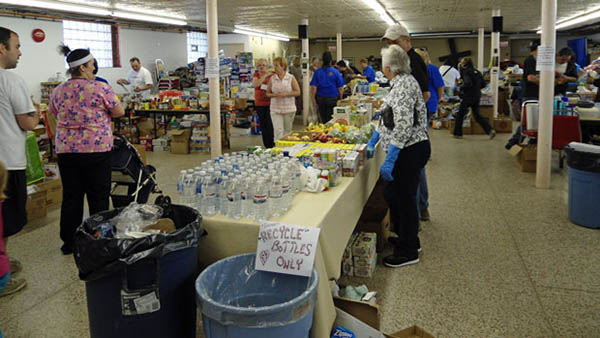 When a disaster strikes, fast and efficient communication, organization, and teamwork are vital to managing relief efforts for a successful outcome. Forums member CrackBerryTorch9800 learned this first hand recently when his town of Thunder Bay in northwestern Ontario, Canada was declared a state of emergency after record amounts of rainfall and flooding devastated the city. The flooding washed away roads and filled basements, but on top of that the sewage plant failed and as a result sewage backed up and filled people's homes causing even further damage. With thousands of people now without food, water, and shelter and desperate for help, the city pulled together and volunteers began running a command center from a local church. One of those volunteers was CrackBerryTorch9800 (whose real name is Mitchell).

"To try and keep everything running smoothly we used Facebook to coordinate. A friend and I were the ones running the site and keeping people updated. Much of the time I spent doing this was on my Bold 9790 or my PlayBook. My friend also has a 9860 which he used to keep in touch with people. We organized pumps to get people's basements dry, we got heaters for when the temperature went down to 0 and people's gas was still turned off. We were able to pass on the message to news, friends and the Facebook page which got close to 6,000 people.

While I will not take really much credit because there are so many more people who helped to make it run. My BlackBerry Bold and PlayBook were there to help me through this, help me make it work and get the help to the people. Greatly appreciated RIM, thanks for making a great product which is so socially integrated."

Mitchell and his friend Ray were able to provide around the clock updates and information for volunteers and people in need, coordinating efforts to be sure that those in need were able to get the help they required. Reading through the Facebook page Mitchell and Ray are running shows just how amazing social media can be, and the ability to connect while on the go is vital in a situation where you can't be stuck behind a computer.

Read more and discuss in the forums