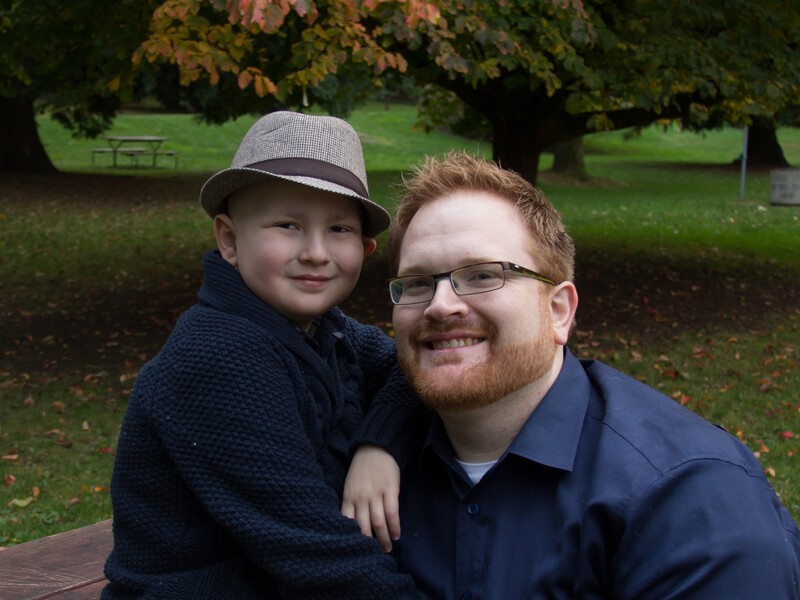 Thank you BlackBerry; honestly and truly, thank you. I know it's an odd statement to make, though if you think about it, we all kind of share our kind sentiments and gratitude in some manner to our smartphones, no matter how small. In the struggle many may face when it comes to attempting to unplug ourselves from our devices, it's almost inarguable to say that without them, and we would sometimes be at a loss.

Thankful; I've wrestled with this idea for quite some time. I have to admit it's not easy to feel that way these days. I feel lost without my son Keian who passed away from T-cell Acute Lymphoblastic Leukemia on January 1st 2014. I cannot even think of how to convey my grief. What he enjoyed. What he did for others. How we tried everything to protect him. Amongst countless emotions and thoughts; we are thankful for our time with him, albeit brief. We are also thankful for anyone and anything that helped us spend as much time with him as we did.

I know it's odd for me to say, trust me, I find it odd that I'm even saying it. But I can't help thinking about what helped us connect and stay as strong as we had been. So yes, I am thankful to BlackBerry, just as I am thankful to Lego for letting us create together and for transforming Keian from an observer as Daddy built to an amazing builder. I'm thankful to Nintendo for their Wii and Wii U which allowed him to kick my butt again and again (…and again). I'm thankful to Crayola which let Keian's creativity shine through.

I can honestly say from July 2012 until January 2014 we were in a constant state of fight or flight, with the emphasis on fight. Fighting to keep him with us, fighting to make every moment one of quality, love and joy for him. Moments of sitting on the couch and using the laptop were becoming extremely rare so we relied on our BlackBerry smartphones and our BlackBerry PlayBook tablets to be our constant companions. They were our go to devices when we researched each and every type of chemotherapy drug that was given to him. Each time we were given his CBC (Complete Blood Count) on a weekly, daily or even hourly basis, we shared white blood cell and absolute neutrophil counts with each other via BBM if we were out of the room. We connected with friends and family through Facebook, Twitter, BBM, SMS and even good old fashioned phone calls to give them updates, plan visits and to schedule meal drop offs for us for when we stayed at the hospital. During those hospital stays, we would use the video chat to talk, share goofy faces or watch Keian dance.

Keian had relapsed twice during his treatment; once in his spinal fluid and the second time in his bone marrow. When he first relapsed, the game plan had changed; he would need a bone marrow transplant which required a potentially long term stay at the hospital. Now, with me being off work we could no longer afford to keep our suite out of town while being at the hospital full time. We were offered a 26 foot camping trailer located at the back of the hospital. So we then packed up all but the essentials into storage and moved to Vancouver; where we stayed in that trailer between March and mid May. I have to give kudos to my wife for her organizational skills. Between notes and images, her BlackBerry smartphone became a detailed database of each box and their contents; which helped me out whenever I had to go on a supply run through our packed up items. At this point, especially with Keian's baby brother (and bone marrow donor) Joren, only one of us could stay overnight with Keian at a time, given the isolation rooms being quite small. So one of us would stay in the trailer overnight with his brother and would then visit as much as we could while he was in transplant isolation.

I found my daily tasks and communication so much easier on the BlackBerry 10 operating system.

Now you may ask about the accommodations at the trailer. Electricity? Yes. Water and plumbing? Yes. Cable? No. Wi-Fi? No. So now our BlackBerry smartphones were our only connection when we were apart. It was my source of entertainment, computer, radio, almost anything I needed, and I had to rely on one device. Shortly after the BlackBerry Z10 launched, Telus contacted me through Twitter and gifted me with one . I found this odd as I had never been a Telus customer and was even an employee of another carrier, but I was extremely excited nonetheless. Keian thought my Z10 was cool, mostly for the games he would play on it and how quickly he could take pictures now. Though I loved my BlackBerry Bold 9900, I found my daily tasks and communication so much easier on the BlackBerry 10 operating system. The browser was so much quicker and easier to navigate, though sometimes, I would still use BlackBerry Bridge to get the larger screen experience on my PlayBook when I needed it. Between the swipe gestures and predictive keyboard, I was able to get more done is a smaller period of time. Less time on the tasks, more time with Keian.

During his treatment, we kept a record of most of Keian's journey through a blog, which was aptly named Keian's Journey. My wife did most of the writing and would often do so on her BlackBerry smartphone. As soon as an update would hit, I would update on Twitter and she on Facebook. Shortly after his second relapse we stopped focussing on the blog and used a Team Keian twitter account and Facebook group to keep everyone in the loop; both of which were mostly updated from our respective BlackBerry smartphones. We were also contacted by the media numerous times and would have to respond quickly to emails and photo/video requests. Running to the laptop was few and far between as we could easily access my Dropbox account to share folders to get images off to the reporter before the deadline. Time with Keian, although always cherished, was becoming increasingly precious, so it was quick updates during the day and longer ones when the kids were asleep. We would scour the internet for possible treatments, alternative, experimental, you name it - we researched it. Almost every nurse and doctor commented that we were known for our questions and research. How could you not when you are trying to save your child?

Sons want to be like their fathers and Keian was no different. He had a dummy unit Curve 8310 that pretended to use and would grab ours when he had the chance. I'm not making this up when he said that he wanted to have a Z10 when he grew up, just like daddy. I told him about the recently released Z30 (at the time) and he decided he wanted a better BlackBerry smartphone than me. Last August, we upgraded my wife to the Q10 and Keian's immune system was strong enough to allow him to come with us. At a Best Buy, my wife commented to the mobile manager that I used to write for CrackBerry and coincidently a BlackBerry representative was setting up his booth a few feet away. It was difficult to carry on a conversation with him, and watch an avid Android fan challenge him to make him convert.

BlackBerry means business and so does Keian.

As much as I wanted to engage, my focus since July 2012 was on my son and felt bad about focussing elsewhere, even for a couple of minutes. But Keian liked looking at the phones on display and was excited when he was given BlackBerry 10 pens and other swag. I don't know if he felt more connected to me through my interests. Perhaps he knew we connected through what he liked that he wanted to do the same for me. The BlackBerry representative took a picture of Keian and I at the BlackBerry table that you saw above. I loved how Keian wanted to wear a shirt and tie. BlackBerry means business and so does Keian.

When he passed, my world fell apart. My son, my best friend, was no longer here. We shared so many common interests and to have that taken away, there are no words. We keep fighting in our own way and will continue to honour Keian by helping other oncology families. We will do so using our BlackBerry smartphones, through social media, BBM Channels and future BlackBerry apps. We fight as he did. I am thankful to be Keian's dad and thankful for each second we had. I'm thankful to the CrackBerry community for the support throughout Keian's treatment, both financially and emotionally. Our BlackBerry smartphones helped us capture Keian in dozen's of voice notes, hundreds of videos and thousands of pictures. They helped us share our laughter, smiles, fears and sorrows through social media. They kept us in contact with friends and family. They allowed us to jot down terminology, treatments and more with little effort. They helped us focus less on all of that and more on time with Keian. So BlackBerry, for as odd as it my sound, you were indirectly a huge part of all of this and for that I thank you.