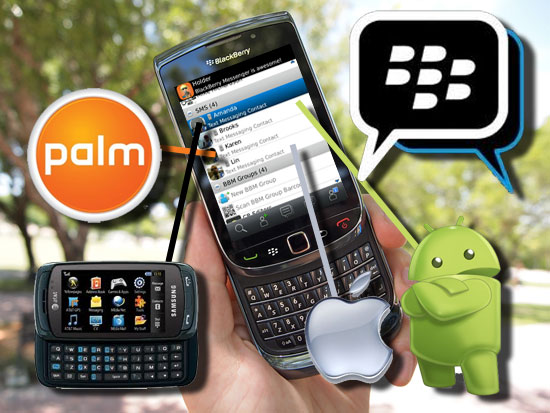 So you want to use BlackBerry Messenger to send text messages, do you? I don't blame you. BBM is an excellent place for keeping up with the people you message most frequently. Chat threads are saved and easily continued. Contacts can be split into different categories like "work" and "family" and "Wednesday Night Bowling League." And I find it much easier to start a text conversation by opening BBM and tapping on a contact. To send that same message using the Messages app, I have to open the app; touch Compose Message; then Text; then type in the name of the contact; and press enter. Already, BlackBerry Messenger is looking like a great place to store my text messaging BBM Contacts.

When a BBM contacts messages you, you'll get the standard new BBM notification. Whether that message comes from an actual BBM message or from a text message doesn't matter. After linking your BBM contacts to a BlackBerry Contact or adding a text only contact to BBM, you'll be able to converse entirely with that most powerful of messaging applications, BlackBerry Messenger.

As of this writing, the entire world has not adopted BlackBerry as the one and only wireless phone. There are Android phones, Windows Phones, some obscure device called an iPhone, and I'm sure there's still plenty of people rocking an ol' Motorola RAZR. Though these people can't have BBM, it at least can look that way from your end.

To begin, add a contact as you normally would. From the BBM menu, select Invite to BBM. Don't worry if the other person doesn't have a BlackBerry. At the bottom of the options that appear, select "Add a contact for text within BBM. Where you see "Phone" at the top of the next screen, type in a phone number or the contact's name in your BlackBerry contacts. If you use one of your Contacts, BBM will fill in most of the information for you. Select a category for your new BBM contact and click the Add Contact button at the bottom.

Using text messaging isn't a perfect substitution to BlackBerry Messenger. Text messages are limited to 160 characters (though if you go over, your BlackBerry will just send multiple texts as usual). Pictures and other media will take longer to send as they are chopped into 160 character segments. And of course, you won't get the Delivered and Read notifications.

Still, I find BlackBerry Messenger to be a superior app, even when just text messaging someone.