Okay, so that video up there isn't of Tetris on the BlackBerry. It does go to prove, though, that Tetris is one of those rare games, belovéd around the world. It has been played in over 50 languages and more than thirty platforms (plus buildings).

Created in 1984 by Russian scientist Alexey Pajitnov, the game centers around cajiggering* seven differently-shaped "tetraminos" so that they slot into place and form an unbroken line of blocks. You probably knew that. What you probably didn't know is that the Tetris music is a real Russian song called Korobeiniki, and it has words and everything. Sadly, in this version, there is no music.

Tetris is one of those games that can be really fun to play for 2 minutes or for 20 minutes. Tetris by Electronic Arts certainly lives up to that promise. I've really come to enjoy EA games on my BlackBerry; they seem to know what they're doing when it comes to games on the ‘Berry. Incidentally, EA did a great job designing Tetris for the BlackBerry PlayBook. 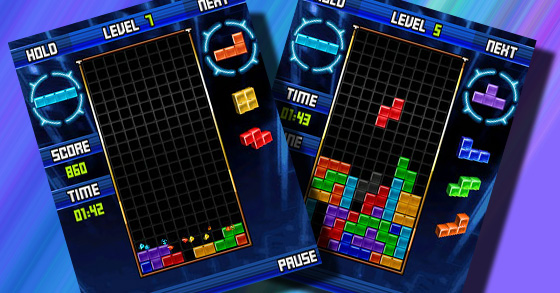 Much of that experience translates to the smartphone game, especially for BlackBerry Torch owners like myself. Just as in the tablet version, quick swipes down the screen drop the tetraminos to the bottom. A tap to the left or right rotates the shape. The only thing different is you can't flick up to swap pieces. You'll actually have to touch the holding area to swap pieces.

As with many Tetris games, you can choose how you want to play with Marathon, Ultra, and 40 Lines game modes. These last two modes are for those times when you only want to play Tetris for a little bit. In Ultra, score as many points as you can in two minutes. 40 lines pits you against the clock as you race to clear 40 lines of tetraminos.

Marathon is your standard gameplay of Tetris. After clearing a certain number of lines, you move to the next level. Gameplay gets faster each level you go up. And then it gets faster, and Faster, and FASTER. Soon it becomes quite a challenge just to keep the blocks moving, let alone slotting them in the proper place. And therin lies the fun of Tetris.

Tetris by Electronic Arts is available in Canada, the US, and Japan for many BlackBerry models running OS 4.2 and higher.

*not a real word.  And by the by, those screenshots up there aren't from my Torch.  Tetris seems a very shy game; taking screenshots myself proved impossible.