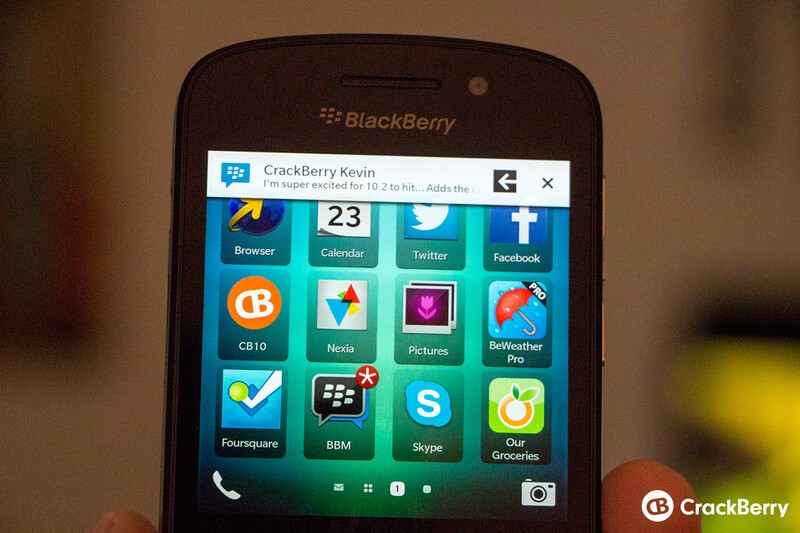 51 weeks ago to the day, I published a story on CrackBerry titled Ten Things We're Looking Forward to in BlackBerry 10 so far. At that point in time, BlackBerry was doing a road show giving select members of the press and VIPs an early hands-on with the BlackBerry Z10 and BlackBerry Q10. Prior to that, the only real glimpse we had was of the canned demo build that was shown off on a Dev Alpha unit a few months prior at BlackBerry World. At this point, we were finally able to say that BB10 wasn't vaporware -- as some were still suggesting at that point -- and put BB10 to use in our hands. We were limited to what we could talk about, but we were still able to say a lot. And we were excited. It only took a few minutes to understand the power of the unified messaging hub and flow working together.

Fast forward to today and things have come along way - BlackBerry 10 is in our hands and we're all familiar with it. You can put it to use on the Z10, Q10 or Q5, and the follow-up 5" touchscreen Z30 is just around the corner. On the software side, we've already jumped to BlackBerry 10.1, and now BlackBerry 10.2 is the next major update to roll out. While the 10.1 update brought many stability and performance enhancements along with some feature enhancements, we're really looking forward to 10.2 as it's introducing a handful of features that we've been hoping and waiting for since we first got our hands on the pre-release phones a year ago.

Lets take a quick look at TEN of the features we're looking forward to in BlackBerry 10.2!

This is potentially the feature I'm most looking forward to in 10.2. Toast notifications put a sprinkle of additional crack into the BlackBerry communication experience. As photographed at the top of this post, with Instant Previews enabled, inbound messages will be displayed on the screen regardless of what app you're in on the phone. And better yet, not only can you preview the message but also reply right there on the spot, without having to quit what you're doing and moving into a different app to respond. If you're hardcore communicator -- which BlackBerry users tend to be -- this is the type of functionality that will save you seconds all day long. We've currently seen that this can be used for email and BBM but we hope that other apps like Twitter and Facebook are added as well.

The unified messaging Hub on BlackBerry 10 is brilliant. Whenever I show off my Z10 to Q10 to people for the first time, the Hub is probably the single feature of BB10 that gets there attention the most. Being able to bring all your core communications into one app and access them from anywhere with a swipe is convenient. The only problem is, when you get a lot of messages from a lot of sources, that can also turn into a lot of noise to contend with. The Priority Hub allows you to set your VIPs so you never miss a message from the people you care about most (Adam snapped this screencap... I'm glad to see he cares about me and his wife!). You'll see the red "tag" next to priority messages or you can simply view the Priority Hub from the action bar to see all of your most important messages.

Speed of use. I've always viewed this as one of the features that makes the BlackBerry experience so addictive. The BlackBerry experience is to get your attention (blinking red light... you have a message!), then in as little time as possible get you to that message so you can view it, respond if necessary, and get the phone of your hand again so you can get back to life. To that end, nothing beats a good 'ol BlackBerry 8700 worn on a holster with no password set, where you could whip the phone out and would open full screen to that message.

With the BlackBerry 10 experience, in some cases we've seen this speed of use experience -- especially as it pertains to reading a new inbound message when the phone is turned off -- take a back seat. Depending where you turned the phone off (let's say you left the phone in the web browser, after having clicked a link from an email that was sent to you), it can take a few swipes and taps to get back to your inbox and read the newest message. I've viewed this as being a very unBlackBerry like feature of BB10. With 10.2 and Lock Screen Notifications, this is starting to be rectified, where you can more quickly see the message you just received. It's a good thing. You can simply scroll from the standard calendar view of the lockscreen to see quick previews of any new messages you have.

The average person probably doesn't want to think about task management and device monitoring on their mobile device, but I do, so I'm glad to see it's coming in 10.2. BlackBerry 10 is a mobile computing platform - computers always have task managers. It doesn't matter what type of system you're using, there's always a finite limit (even if it's a big number) to the CPU power and memory you have. Being able to see what apps and system features are using what is a good thing.

It's an expectation that apps -- including third party ones -- should be able to run in the background. This was the case with BlackBerry 7 and older phones, but it hasn't been to date on the QNX-based BlackBerry 10 platform. With 10.2 we will start to see apps go headless. From what we've seen so far, it's not quite the full out support developers have been hoping for, but it's welcome step in the right direction. Right now it's kind of annoying to have to leave certain apps running in open active frames (Wallpaper Changers, etc.), even though you don't actually have to use the app but just want it to execute background tasks.

6. Multiple Alarms on the Alarm Clock!

Finally with 10.2 we'll see multiple alarms hit the clock app. This should have been there at launch in my opinion, but better late than never. If you followed the BlackBerry 10 launch you'll remember I was ticked off when I discovered that Bedside mode was effectively broken. That was fixed FAST, but multiple alarms took a little longer. I'm happy it's coming now - this is a feature I value and USE a lot.

7. More Apps Integrating into the Hub

Currently only native and big name apps (Facebook, LinkedIn, etc.) get to tap directly into the root level of the Hub for delivering messages. To date, other third party apps get pushed into the Notifications section of the Hub to compete for attention. With 10.2, upon approval by BlackBerry, you'll see more apps be able to work into the root level of the Hub. We've been wanting this for our award-winning CB10 app, so hopefully we'll be able to make that happen.

I love Evernote (use it religiously), and on BlackBerry 10 native support for it is there but it's baked into the BlackBerry Remember app. Some people are ok with this... others hate that. With 10.2, it's looking like Evernote will get a dedicated app experience. A good thing IMO.

There are definitely some great third party weather apps for BlackBerry 10, but I'm glad to see the default installed one is getting an update too on 10.2. When it comes to native apps on any mobile OS, I expect them to look great and work great. One thing that still surprises me is that given the historic business focus of BlackBerry, is that there still doesn't appear to be a native stock app on BB10. Though on second thought, maybe it's better to leave that out of the OS until BBRY shares are soaring again :)

Numbers 5, 6, 7 and 8 have all been app-related things we've been looking forward to in 10.2, and we've saved the best for last. With 10.2 we'll see the Android App Player on BB10 get updated to now support Jellybean (Android 4.2.) With this, we should see a lot faster and smoother experience for apps that take advantage of the player, and also a lot more apps work that formerly did not on the Android 2.3 Player.

Everybody wants more apps on BB10, and this should help.

That rounds out ten things we're looking forward to in BlackBerry 10.2, but there's more than that. Little improvements like the improved copy / paste selector will be a nice refinement, as is the ability to separate notifications for BBM Groups (speaking of BBM, we should see BBM Channels and cross-platform BBM roll out soon and likely be in there with 10.2).

What are you most looking forward to in BlackBerry 10.2? Let us know in the comments!