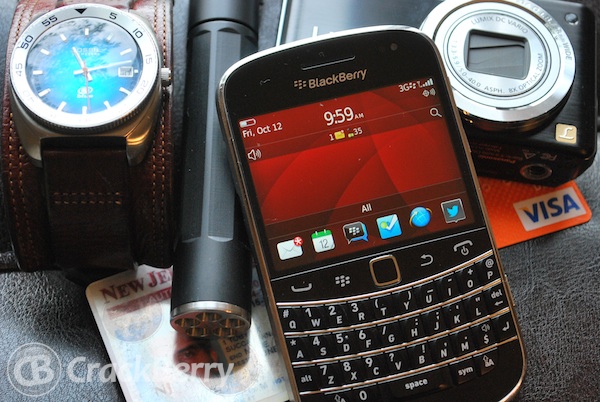 I got into a conversation with my mother-in-law a few nights ago about how as kids, we used to play outside whenever we had the chance. Over the summer I'd be out right after breakfast, only coming home to eat dinner, then go back out as long as there was daylight. Not anymore. Kids (mine included) since inside all day watching TV or playing video games. Mine dreads the thought of having to play outside.

As we sat and talked, I had my BlackBerry in hand. I looked at it a bit and realized just how many items from my youth it had replaced. I no longer had scattered items around to get through my day, just this one tool that has everything I need. While there are countless ways a BlackBerry (or smartphone in general) has changed daily life for users, in honor of BlackBerry 10, I've compiled a list of the top ten items my BlackBerry has replaced.

Ten things my BlackBerry has replaced

No brainer on this one to get it started. After my last move I totally ditched my landline. Why have two numbers for people to remember when I always have my BlackBerry? I'm rarely home as it is, and much prefer the convenience of just having my phone with me and not worrying about who's calling me at home when I'm not there.

Right off the bat I'll set things straight - if you have some crazy expensive digital camera point and shoot or DLSR, this obviously won't apply to you. But for the average user, your BlackBerry has let you ditch that little camera you find yourself carrying around on trips or to family parties. I no longer worry about having my point and shoot when I go out for the day, knowing that my phones camera will get the job done.

The BB10 camera beats the cameras that we've seen in the latest round of BlackBerry 7 devices as well. The EDOF camera in the Bold 9900 was a total flop, so it's a welcome relief to finally have a great camera to use. Add in the Time Shift feature and video recording and you've got a great setup.

I've been one of those people that has always had a stand-alone MP3 player in addition to my phone. I was never big into using my phone for music, be it for the lack of storage space or just not wanting to kill the battery. I always found it better to have a music player that was only for one job. Over the years I've come to my senses and started using my phone for music as well. Not only can you store massive amounts of tunes on a media card, but you also get the added benefit of streaming music services so you have plenty of options.

While this may not be the case for everyone right from the start, plenty of banks and merchants are already using NFC for mobile payments. I've been a slim wallet kind of guy for years. I only carry what's necessary, and even that is too much at times. I have my credit card, debit card, license, insurance card and business cards - that's it. As we move forward, I'm hopeful that my bank works up NFC payments for my debit card like we've already seen a few times. I'd love to ditch my cards and only have my phone when I go out.

When was the last time I picked up an actual, real calculator? Well, yesterday (I have one in my desk). But honestly - I never use one anymore. My phone has become my go-to calculator. Simple math was never an issue on my BlackBerry, and now thanks to the awesome calculator on BB10, even advanced math and conversions are no issue.

If it hasn't already, your BlackBerry phone will also replace your GPS unit. Pretty much everyone in my family has a portable GPS in their vehicle but that really isn't necessary. There are some great apps out there for GPS that do just as good, if not better, than a separate GPS unit.

RIM has great things to come with maps and GPS thanks to their partnership with Tom-Tom as well. No more worries about outdated maps or not having a GPS when you travel. Just bring your phone with you wherever you go and your GPS is there with you.

Are you sill using an actual alarm clock?? I would hope not. My BlackBerry has been my favorite alarm clock for months now. My charging pod + Bedside mode combo is awesome. I never have to worry about not having a good clock when I travel and I know that my alarm will always be set - even when the power goes out. You can set alarms for whatever you want and even pick a clock face that's easy on the eyes.

Yes, this is another you've probably done already, but my BlackBerry made me ditch my watch. Unless you're a timepiece afficianado like Kevin, you probably will be willing to lose your wrist wear in favor of the clock on your phone. It's second nature now to just grab my phone and tap a button when I need the time. My wrist enjoys the freedom and I never worry about forgetting a watch before I head out the door.

Am I stretching for this one? Maybe a bit, but do you actually know how many flashlights you own? I counted and I have no less than 10 in various drawers, cabinets and shelves all over my house. It's no secret that there are plenty of flashlight apps available for BlackBerry, but it really is handy as a light. You don't even need an app - you can just fire up the video camera and turn on the flash. Even better? The flash on BB10 is annoyingly bright, so it's probably better than half of the flashlights you own anyway.

Lots of Other Stuff

I could go on here for a while. What else has my phone replaced? My calendar, compass, to-do list, shopping list, newspaper ... the list goes on and on. Natively, the apps on BlackBerry kill off a handful of other gadgets we've always used, but add in third party apps and you're on your way to slimming down your life.

While this is just my list, I want to know what your BlackBerry has helped you replace. Your camera? Newspaper? Radio? TV? Let us know in the comments your own top 10 list in honor of BlackBerry 10. The list may grow even bigger once BlackBerry 10 launches and we see what other goodies RIM has in store for us!