Back in March, we reviewed the TeleNav GPS Navigator for BlackBerry. We were extremely impressed how the software/service can transform a BlackBerry into a full GPS navigation system. 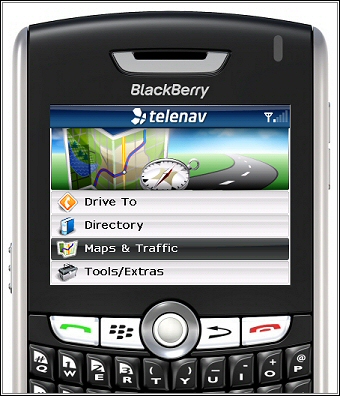 TeleNav recently announced an updated version of their system, TeleNav GPS Navigator v. 5.1 which now includes TeleNav Traffic, a new module alerting drivers of traffic congestion and incidents. The overall product also benefited from a face-lift, giving it a slick new design and making it even easier to use.

Just like turn by turn directions, traffic alerts are both audible and on-screen. Drivers have the option of choosing a faster route to their destination by simply pressing one button. You’ll definitely save hours on your commute with this new feature. The traffic detail screen provides you with a ton of information to better understand what’s going on with the traffic. This includes additional time it will take to travel a segment, slowest speed observed, average speed, and incident details with location, severity and additional comments.

Get intelligent traffic notification and rerouting
Additional features have also been introduced in the navigation module. You can now search for Wi-Fi and Parking locations. A new tool also allows you to mark a spot. For example, when leaving your car in a huge parking lot at the airport, simply mark the location and you won’t waste any time when trying to find where you left it.

For those of you who still don’t have TeleNav, give it a try, you won’t regret it. It is compatible with most of the recent BlackBerry devices, whether you have an integrated GPS or are using an outside module via Bluetooth. If you are already a TeleNav subscriber, v5.1 is available as a free feature upgrade.