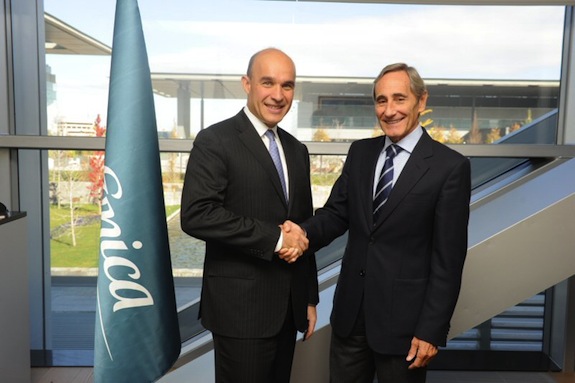 While new BlackBerry 7 devices with built-in NFC have been out for a while now, we're still in search of ways to take advantage of them. There aren't currently many apps or services that make use of NFC, but today RIM and Telefonica have teamed up to bring mobile payments to NFC-enabled BlackBerry smartphones. Telefonica's BlackBerry Wallet allows users to pay with their device simply by tapping it against a reader. This is the first of what we hope is many NFC payment solutions for BlackBerry and a very welcome addition. Keep reading for the full press release.

Telefónica Digital and Research In Motion (NASDAQ:RIMM)(TSX:RIM) today announced a pilot program of the Telefónica Wallet for BlackBerry® smartphones.

In collaboration with local banks and retailers, Telefónica will roll out the Telefónica Wallet for BlackBerry to 350 employees at its headquarters in Distrito Telefónica, Spain. Those taking part in the trial will be able to make payments in a simple, easy, safe and convenient way by simply tapping their NFC-enabled BlackBerry smartphone against a reader. Employees that are part of the NFC pilot project will also be able use their BlackBerry smartphone (in lieu of a security card) to gain physical access to the Telefónica headquarters office.

According to Julio Linares, COO from Telefónica, S.A., "We have chosen the BlackBerry solution for this pilot because of the security that the platform brings," He continued: "RIM's participation has been key for this pilot project, and we are now planning to extend the project to more and more Telefónica employees around the world."

"We are getting ever closer to the point where our customers will be able to take the contents of their wallets and put them on their mobiles," said Matthew Key, Chairman & CEO Telefónica Digital. "Trials such as this are important to ensuring a great customer experience and we look forward to seeing the launch of commercial wallet services in several markets next year."

"RIM is committed to supporting the advancement of NFC and its many applications in the market," explained Jim Balsillie, Co-CEO at RIM. "We have a strong partnership with Telefónica Group and we are very proud to participate in this important pilot, which allows people to use their BlackBerry smartphone in place of separate physical cards for mobile payments and building access."

The Telefónica Wallet for BlackBerry makes use of SIM-based NFC capabilities, offering a simple interface for managing cards. The application replicates a physical wallet, showing the different cards available to the user. Once the user has selected a card, they are offered a range of options including making transactions, getting account balances, receiving confirmations from the bank.

Additional partners participating in the pilot include banking and financial institutions, retail and food stores, gas stations and others.