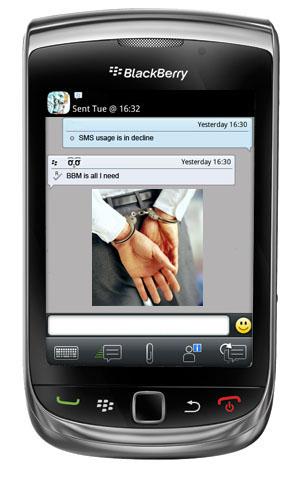 A teenage girl was arrested yesterday, charged with inciting riots via RIM’s favourite messaging service, BlackBerry Messenger. She is said to have sent a BBM message encouraging others from her home town of Clacton, Essex to copy the rioting and looting that was occuring in London, an offence under the Serious Crime Act 2007.

Earlier this week we reported that RIM promised to help in any way they could to aide in finding the people behind the riots. Does this mean that RIM has made their data available to the UK government? Yesterday the UK Prime Minister, David Cameron said that he would be in talks with RIM, Facebook and Twitter in order to look at ways they could prevent rioters and looters communicating through these services to organise criminal activities, stating "We are working with the police, the intelligence services and industry to look at whether it would be right to stop people communicating via these websites and services when we know they are plotting violence, disorder and criminality" It is the wish of the UK government to stop these services during periods of unrest. MP David Lammy of Tottenham, where the riots started, made his plea of shutting down the BBM service after the first night of riots, with a lot of other MP's agreeing.

We've mentioned before that BlackBerry is very popular amongst teenagers, so it comes as little surprise that BBM would be used as a means of communication. But are the UK government right in requesting these services be stopped? And should RIM have given in to these demands?