Back in May, I posted in the CrackBerry forums about a pretty shady rumor I had been hearing for a while now. The rumor, at the time, was that BlackBerry had formed some sort of working partnership with TCL Corporation, who produces smartphones under the Alcatel brand to produce devices for BlackBerry with BlackBerry branding. 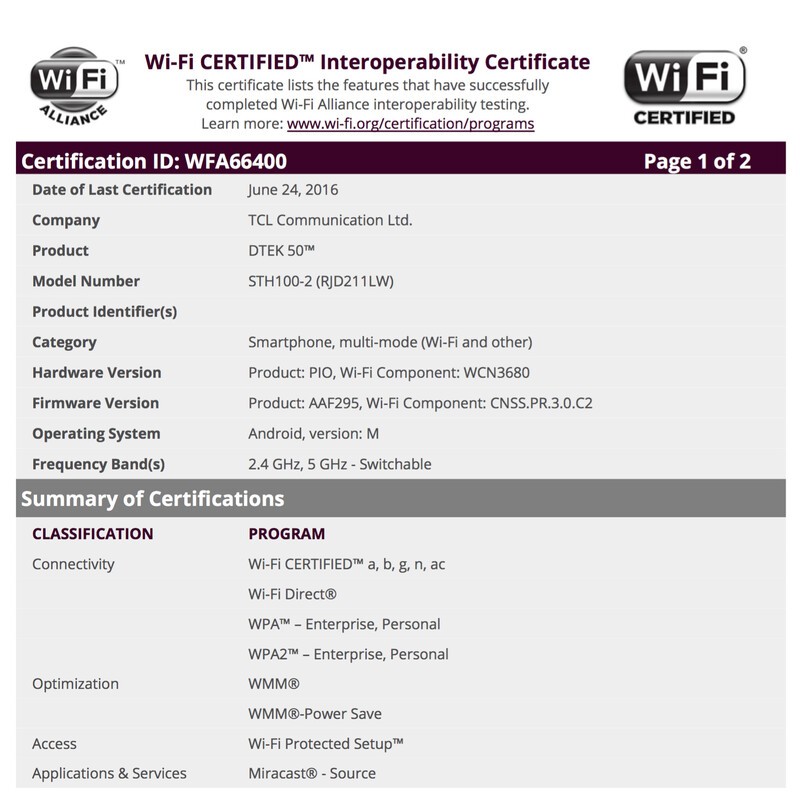 One of those devices with the potential to reach the masses would be based on the Idol 4 but arrive with BlackBerry branding otherwise known as 'Hamburg'. While it remains to be seen whether or not that that exact situation is taking place, additional documentation has now popped on Twitter via @rquandt which points to something going on with BlackBerry and TCL Corporation.

As highlighted in the image above taken from the Wi-Fi Alliance product finder, TCL has received certification for a smartphone product named DTEK 50 which carries the model number STH100-2 (RJD211LW) and runs Android Marshmallow with a build number of AAF295. Looking at that, one could break it down to two things. That's either a lot of coincidence or BlackBerry is almost certainly working with TCL / Alcatel to release some sort of smartphone.

Also, keep in mind that BlackBerry CEO John Chen recently noted on the Q1 2017 earnings call, 'we are at the point that where our business are extremely efficient and we no longer really making any hardware. We are really a hardware design house. I do design, I don't really make hardware' and noted new manufacturing agreements that are 'a little bit more efficient than Foxconn.'

No doubt, there's not a lot of answers here, and there's still plenty of unknowns, but no matter how you look at this information or want to take it, it's certainly interesting. I personally don't believe in it all being some freak coincidence. Nor do I believe we'll get a BlackBerry branded Idol 4 exactly because that would just be lame but it's not out of the realm of possibility that TCL / Alcatel has become an ODM for BlackBerry. BlackBerry designs it, TCL / Alcatel builds it, BlackBerry eases up their build out and inventory costs.

There's also one other situation here as well to consider and that is, perhaps TCL / Alcatel will be one of the first to license BlackBerry software from the company as part of their new Mobility Solutions offerings.

PS: I suppose I should also mention, there's a chance this 'Hamburg' could have now had its codename changed to 'Neon' since that's the latest rumored codename being floated about along with two others, Argon and Mercury.