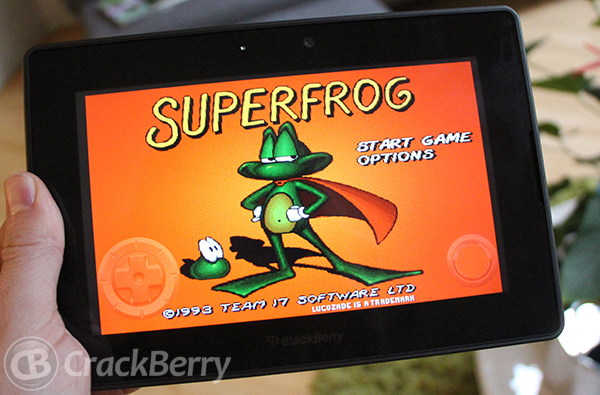 BlackBerry App World received an injection of retro gaming fun four weeks ago, when Amiga made 15 of their classic titles available to PlayBook users. Amiga isn't stopping there though. They have 85 more titles coming shortly to the PlayBook (and BlackBerry 10 of course!), and have a target of at least 1500 titles for the platform.

Though Amiga's gaming roots stretch back over 20 years, Amiga games still have a cult-like community following around the world (start googling around and you'll see what I mean), so it's exciting to see Amiga commit to BlackBerry as they have.

We wanted to find out more about their plans and thoughts on QNX and BlackBerry 10, so we got in touch with Bill McEwen from Amiga. Keep reading for 10 questions with Bill. And if you own a PlayBook and haven't got in on the Amiga action, get to it!

10 Questions with Bill McEwen from Amiga

Kevin: Thanks for taking the time to sit down and talk to CrackBerry today. Let's talk Amiga games!

Bill: I enjoy Alien Breed Special Edition, Wings, and Turrican. At the same time there are literally hundreds that could have the 'favorite" title it all depends on when I play them.

2. Kevin: How many titles are you bringing over to the BlackBerry Platform?

Bill: We are starting with 100, and have a target of at least 1,500. Everything we have tried so far works great, both on the PlayBook and the BB10 so we see some great opportunities for bringing the current titles over, as well as creating new versions of the classics.

3. Kevin: How's the BlackBerry Playbook / BlackBerry 10 platform for gaming from your perspective?

Bill: Great. We are big fans of QNX and once again it does not disappoint. Although it would be great if it did not take so long to boot.


4. Kevin: There are still a lot of hardcore Amiga gamers out there, can you share some insight on your success and the staying power of Amiga and retro gaming?

Bill: Amiga is simply amazing. The community both past and present have a lifelong passion for Amiga. There are so many companies, and titles that were so leading edge when they came out, and now we see that they are just as amazing today as they were when they first came out.

5. Kevin: Are there any plans slated to "remix" some of the older classics and release them under the Amiga brand?

Bill: Yes, there are and we are in discussions with several different companies and developers now.

6. Kevin: With so many classics to choose from -- Speedball 2, Wings, Elite and more -- how do you decide which games to port first?

Bill: Actually we had several of the initial titles requested by various people at RIM, and it is quite a list. Then we have reviewed the many great Amiga fan sites to learn what their favorites are and then we start working on getting them on board the platform.

7. Kevin: Amiga and QNX go back a bit right? 1998? What do you think of RIM's decision to adopt QNX as their next-generation platform?

Bill: Brilliant. When we were under Gateway Computer, we selected and announced QNX as our new Operating System partner. We have great respect for the product and think very highly of it.

8. Kevin: Are there any "easter eggs" or hidden things in the games fans should be on the look out for? Hidden unlockable items? If not, have you considered putting some in for fans to find as a bonus?

Bill: What is the fun in telling you what they are? [ laughs by both parties! ]

9. Kevin: Have to ask... we always do... what kind of smartphone are you rocking today (we assume you'll be buying a BlackBerry 10 phone when it comes out!).. iPhone, Android, BlackBerry?

Bill: I have several phones, I have an HTC Surround, Nokia 900, Galaxy III, BlackBerry Curve, iPhone, and of course the BB10 handset. I think its important to take a look and try the different devices to determine how we can improve what we are doing.

10: Kevin: Anything else you want to tell the CrackBerry community, Bill?

Bill: Kevin, I just hope that we can get some folks out there to know what we are doing and that this is only the beginning of some pretty big plans that we have for BlackBerry, QNX, and RIM.

Kevin: We can definitely help spread the word! Thanks for taking the time to chat with us today!

Download Amiga Games for the PlayBook from App World!