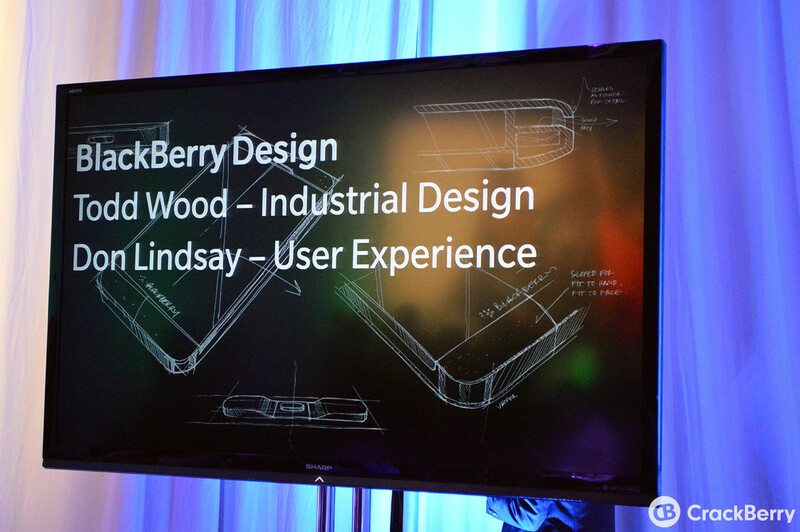 Day two at BlackBerry Live 2013 was ripe with exclusive sessions for the Elite guys and as well as the session with Frank Boulben, BlackBerry Elite members got a chance to sit down with the product design team and learn about the ideas and inspiration for building the BlackBerry 10 platform and devices.

Todd Wood, Industrial Design and Don Lindsay, User Experience gave us a look at how they came about designing what the BlackBerry 10 products we see today.

Todd started off by showing off a house designed back in the 60s that was the inspiration behind creating the flow of BlackBerry 10. The house is linear and you can seamlessly flow between the rooms. So, the design team took inspiration from that and started to create the BlackBerry 10 platform.

They showed off a few early design sketches, stating that sketching is still primarily the way they start the thinking process. We got to see a few early sketches of the Q10.

Todd comes across very proud of the final look and design of the Z10. He mentioned the small details in the finish that adds to the appeal. Like how on both the top and bottom of the device curve/slope down. The idea behind that was to make it easier to slip into a pocket.

The back of the Z10 is made of a soft touch coating, which makes it both silky and grippy. And if you own or have held a Z10 know how nice if feels. The design of the back was created using Computer Aided Design (CAD). Overall they wanted to give it a modern, clean pure design.

BlackBerry has always been about thumbsDon Lindsay, User Experience

You'll probably agree with me that the Z10 has the best virtual keyboard out there. BlackBerry definitely hit the mark and have proved that they can give you the best typing experience not just with a physical keyboard but with a touchscreen one too.

Don Lindsay came on and talked about the keyboard. They wanted to keep the frets, so that it mimicked the physical one. I also think that the sound it makes when you type mimics a physical keyboard sound too. I love it.

They then moved on to the design behind the Q10. Again, sketches were used to to think up design.

The back of the Q10 is made up of woven glass fiber. It is thin, light and strong and also allows for a larger battery to be used as the back door is very thin. It has the same soft touch coating as the Z10 to give that grippy feel.

They wanted the Q10 to have that iconic BlackBerry look, hence it being very similar in design on the Bold 9900. When you look at it, you know it's a BlackBerry.

They showed an interesting picture of the skeleton of the Q10, where all you see is the outer casing around the side and the keyboard frets that go between the keyboard lines. It certainly made me want to get my hands on a Q10 even more.

As you can see from the picture, it is very sleek and sexy, complete with the 'dove-tail' way they connected the keyboard frets to that outer casing. You can also see the fret that goes around the back of the device. If you own a Q10 of have held one, you'll notice that this is slightly raised but about a millimeter. The idea behind this was that if you laid your Q10 down on a flat surface, the camera would be protected as it wouldn't touch the surface due to the raised fret. Small things touches like this are things Todd is very proud of and it was nice know the thinking behind the designs.

Tod and Don then moved on to the inspiration and ideas behind designing the Q5. They knew the market they wanted to target, the younger generation. With the Curve series devices having always been popular amongst the young, the Q5 was made to appeal to the same crowd. Inspiration of colors came from those Swatch watches that come in many different colors becoming a huge fashion accessory.

While the Curve keyboard has always been different to the bold, so too is the Q5 from the Q10. What was interesting to note was the thinking behind the overall design of both the device and the keys. They wanted to keep it uniform with the way the icons for the apps look on BlackBerry 10. The rounded corners of the app border is the same as the round corners of the device itself and if you look at the keyboard keys, these have the same design too. With the Q5 each key has its own pocket as opposed to the Q10 where they are all aligned next to each other.

After talking about the device design they then went on to talk about the User Interface (UI) and how they had to mix things up a little when designing for full touchscreen as opposed to a device with a physical keyboard. The main thing being word prediction. The unique swipe up to complete on the Z10 of course could not be put on the Q10, so they opted for the the in column UI (similar to that found on the PlayBook). Though this option can be turned off for the Q10.

We then move on to the OLED display and dark theme. Kevin has already talked about Q10 and it's dark theme in our comprehensive Q10 review but to recap, an OLED display gives you great colors. With OLED displays it also takes power to light a pixel, so with a dark theme you're not using any power when a pixel is black. Making the Q10 even more of a powerhouse when it comes to battery drain. They did, however, decide to keep the white background for the main messaging tools like emails and texts.

When designing the Q10, they also had to think about how information would be displayed on the screen. With the Q10 having a smaller display, they still wanted to display as much information as they could. They talked about 'Information Density'. Basically, a way to get the same amount of information displayed on both the Z10 and the Q10. One of the areas this is most apparent is when viewing your photos. On a Z10 your pictures are display with three thumbnails going across. On the Q10, you make this four thumbnails and you can present the same information as you can on the Z10.

What is awesome about this is that I didn't notice this until it was pointed out during the session. Or maybe that's just me not being observant enough.

As the session was coming to an end, a few questions were. One question that got asked before I could ask it was, will the be bringing back the multi-select option? You'll know it's quite annoying when you have multiple emails in a row to the delete. While there is an option to multi-select. I, and indeed many others, would like to use two fingers to multi-select just as you can with BB6 and 7.

It is definitely something there are looking into, so perhaps we can see this option come about in 10.2?

I enjoyed this session very much and was nice to get a insight into what ideas and inspiration behind building the devices and OS we see today.