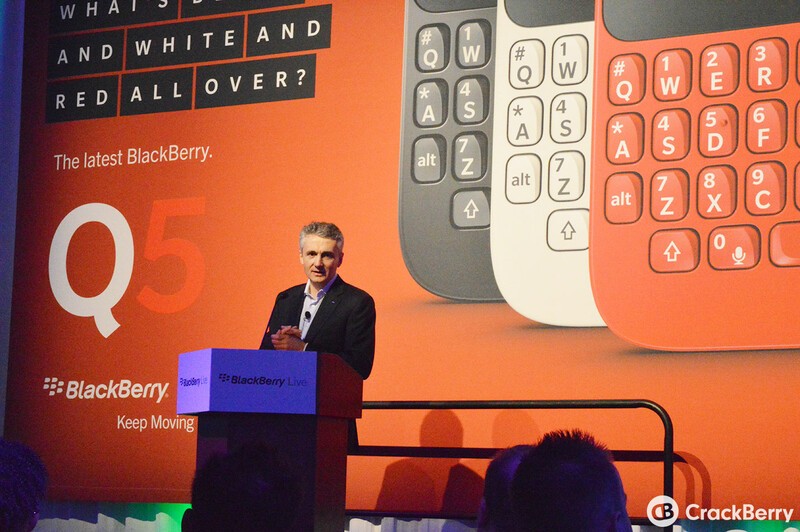 On day two of BlackBerry Live 2013, I had the privilege of sitting in an exclusive session with Frank Boulben who talked about the BlackBerry 10 marketing strategy, Keep Moving campaign and Formula One. He went through some of the changes he had done to their marketing since joining BlackBerry last year. There was also a chance for the session attendees to ask questions at the end.

Frank started off by talking about how he wanted to change online presence of BlackBerry over the past year. The BlackBerry website homepage has certainly changed a lot and you can really see it become more engaging and more vibrant to look at. He talked about the Keep Moving projects and how the initial projected visitor numbers was set in the hundred thousands, but he has been overwhelmed but the fact that visitor numbers to the Keep Moving website has been 22 million so far. Frank also recommends having a look at the Neil Gaiman project, especially if you have younger children.

He then moved on to talk about 'Brand Programming'. Making TV ads with specific content for a specific audience. Frank mentioned that normally, companies go to TV networks and ask them to find the best audience using a given criteria and the ad is played during a specific time of day or during an event -- though most time the content of those ads isn't relevant. What brand programming does is it makes sure the content of ads fits the audience watching. This is the type of marketing and advertising that BlackBerry wants to use going forward.

Frank mentioned that product marketing plays a big part in product design. Before designing, or even while designing, they will reach out to people and get their reaction and feedback on prototypes etc, before coming to a final design in mind. This was apparent with the BlackBerry Q5 design and choice of colors.

Frank then went on to talk about the Mercedes AMG Formula One partnership. It was asked why Formula One was chosen as the racing sport instead of other ones. The simple answer is for its global reach. Formula One reaches a global audience and race events are held all around the world. No better way to spread the word. It is also because it is aimed primarily at target decision makers.

Someone had also asked why Mercedes, and Frank simply said Mercedes want back at the top and a partnership with BlackBerry is the perfect opportunity to do so. Wise move on Mercedes' part.

That pretty much ended Frank's talk but then the floor was opened up for everyone to ask questions. It brought up some interesting questions as well as answers.

An interesting question that popped up was, "why pink"? While we joked about it in CrackBerry's Day 2 Live podcast with the guys' saying that their favorite is pink, I think it's a pretty valid question. While pink is nice and lots of females will buy it, I, personally, am not a fan of pink colored gadgets. (I don't dislike pink, I have pink tops but just don't want my gadgets to be pink.) I'm not the only female in this boat as it was a female who posed the question to Frank on why pink, so it was interesting to get an answer on it. Simply put, it is actually what the majority prefer. Frank said going back to when they released a pink Pearl 8100, it has been a very popular color with the ladies and so they have continued this trend. Though Frank did hint that more colors could come out too.

The reason for many colors is because the target market is mainly the younger generation and emerging markets. It has always been known that the Curve models have always been popular amongst the youth, as well as emerging markets and that's what BlackBerry want to keep on doing providing for that audience.

It has already been confirmed by Phones 4U in the U.K. that they will stock it in the summer. And the Curve models, especially the 8520, has always been popular with the youth in the U.K. So, this is a way to transition the young onto the BlackBerry 10 platform.

Interesting discussion then came up with regards to retail store marketing and sales rep training. We've already heard of horrible in-store experiences, and so the session attendees wanted to know what was being done to avoid these kinds of experiences. Frank said that in the run to the BlackBerry 10 launch thousands of sales reps had been trained up the platform, with more plans to train up more staff in the coming future.

Frank was also asked how they came about naming the devices. It certainly is a question many people ask and we finally have the answer. When it comes to the Q Series, it's more obvious than knowing what the Z stands for. So, Q is of course for QWERTY, for having the physical keyboard. In knowing that the question asked is so what is Z for. Well, it doesn't stand for anything in terms of a word like QWERTY but when you write Z, in the air with your finger, what are you doing? It's a kind of gesture and with the Z Series being the full touchscreen device, you use gestures to navigate and use the device. So, there you have it. Wonder no more, Z stands for gestures. Frank loves to call it Zorro!

Overall, when it came to naming, BlackBerry wanted something that was memorable and gets imprinted in your mind. They wanted away with 'words' like Bold and Curve for something a lot more simple and easier to remember. Letters certainly are easier to remember, especially when they are associated with a specific type of model - touchscreen keyboard and physical keyboard.

The whole session was very enlightening. I certainly came away from it with a lot of positive things and it was great that Frank took the time to have an exclusive session with BlackBerry Elite, coupled with the fact that the floor was opened for Q & A. I'm looking forward to seeing what else comes to the table when it comes to seeing BlackBerry advertised.